You are here: Home / Library / The Florida Trail End-to-End 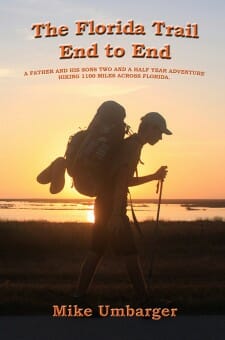 Purchase on AmazonPurchase for Kindle

When Mike Umbarger first started making plans to take his boys hiking on the Florida Trail, his questions popped up on a forum I was running on this website at the time. It was heartening to see a father planning to get outdoors with his children. What began as a day hike here and a backpacking trip there, mostly centered around their home base of Orlando, became a jigsaw puzzle of hikes across the state to complete the Florida Trail.

Released this April, Mike’s book, The Florida Trail End to End, recounts their journey. It took two and a half years for Mike and his sons Zack and Cody (ages 13 and 10 when they started) to finish their series of backpacking trips, day hikes, and roadwalks to say they’d walked from one end of Florida to the other on the Florida Trail. John hiked with them as part of a group hiking the Big Cypress Swamp in 2013, and we encountered them again that spring as they were finishing up in Blackwater River State Forest.

After reading his book, I asked Mike to reflect on how hiking the Florida Trail changed their lives.

“The most fulfilling part of completing the trail was seeing Zack and Cody transition from new backpackers to long distance hikers,” said Mike. “They showed such great teamwork helping each other stay motivated when the other felt low. Watching them learn to hike was amazing. I still remember how nervous they were the first time I told them that they were in charge up setting up the tent. I showed them how to do it multiple times and now I would only show them where to place it and they would do the rest. I sat back and watched them work together and set our little tent up, they kept asking ‘Is this right?’ and I would respond ‘We’ll see.’ It took them a while, but they set it up perfectly. The next hiking season, we had bought our friends an identical tent so they could hike with us. I watched in amazement as my two boys showed the others how to set up their camp. The final season, I remember asking Zack to start getting the gear out at camp while Bear (Cody) and I went for water. When we returned, Zack had the entire camp set up. The tent was up with all the gear inside, the bear rope was hung (downwind), and the camp stove was set up with our food waiting to be cooked.”

“I was also impressed on how they both stuck it out, especially the last six months,” said Mike. “Our last six months of the trail, we would hike for a week, take three weeks off, then head out for another week. I loved how their motivation remained high with such a fast turnaround, which also included the Big Cypress Swamp, which was their toughest hike ever.”

When you roam the length of Florida, you discover our state’s diversity. “We did not realize just how much a few feet in elevation could totally change the trail,” said Mike. “It was pretty neat to start off the day in a pine forest and watch it change to an oak canopy, then an open prairie, a palmetto thicket, and a dense jungle-like hardwood hammock. Florida may be flat, but we see more different types of plants and trees in one day than we see on any mountain hike.”

With his wife Dawn an integral part of logistics for their hikes, Mike had high praise for the entire family pulling together. “I think our adventure really brought our family together as a team. Even though the boys and I were the only ones hiking, it took the entire family to work together to make this adventure possible. Dawn and Hannah only got to camp a handful of times as we hiked through Ocala. We would all stay together at the established campgrounds through Ocala, slackpacking along the way. The rest of the time Dawn and Hannah would drop us off and pick us up, driving hundreds of miles and several hours at a time. Several times they would have unscheduled trips if one of us got sick, or some equipment broke. I lost track of how many times their schedule was interrupted in order to help us out. If it had not been for them, our adventure would not have been possible and we are truly grateful. That’s why I tried to give them a well deserved dedication in the front of the book, but even that can not reflect how special they are to us.”

Living simply is something that every long distance hiker learns, and the Umbargers were no exception. “Since we were already avid campers, we were used to pretty simple living. It did take several trips to narrow down what equipment we actually needed and what we did not, to try to bring our pack weights down as far as possible.

What was the toughest part of their journey? “Making sure the boys were safe, having fun, and staying motivated,” said Mike. “The last thing I wanted to happen was for one of them to get hurt, sick, or just not have fun where they would never go out again. I would always walk in the back so that I could watch how they were walking, and listen to their conversations so I could make sure that we could make adjustments if needed, which we did many times. ”

To make adjustments, Mike planned their days in advance. “I usually always planned three pickup points for the end of each trip,” Mike said. “One primary, one closer (in case we were not making very good progress), and one farther out, in case we made better time. I finally got to a point that I could tell how each of the boys were doing by just they way they walked, or held their head, or how they were talking to each other.” Spending so much time on the trail let them learn their strengths and weaknesses. “As a group, our third day out was always our toughest,” said Mike. “For some reason ‘Day Three’ usually meant a slower pace and a little lower morale. However, ‘Day Four’ and the remaining days of the trip were fantastic. We did attempt one 30 day trip. During that 30 days, we ended up coming off the trail for a day or two each week because of sickness and one very low morale day, but we did head right back out as soon as we recovered. Our average trip for our entire adventure was 7-10 days. I made sure that if it seemed like it was getting to be too much, we always came off the trail and headed home. I kept telling the boys that ‘It’s not a race or a forced march. The trail will be here when we get back.’”

With their big accomplishment behind them, the family still gets into the woods together. “Zack is starting college…and Bear has headed off to public high school, so it is much harder to plan trips around their schedules. The entire family went out on an overnight backpack trip last year and Bear and I hiked for five days on the AT in North Carolina. Later this summer we are heading down to camp for a few days at Bahia Honda State Park in the Keys.”

At 312 pages, it’s an engaging read to follow the family’s adventures (and misadventures) along the Florida Trail, including how their friend “Cool Breeze” got his trail name and how they were strafed by a crop duster during a rural roadwalk. The boys enjoyed surprising people they met by telling them how far they walked, and why not? It’s an incredible accomplishment for teenagers. “I had a great time watching Zack and Bear grow up on the Florida Trail,” said Mike, “watching them go from holding their cookies above their heads because the grass they were hiking through was as tall as they were to seeing them become self-sufficient near the end was awesome. Hopefully I will get to do it again with them and their kids in the future.”