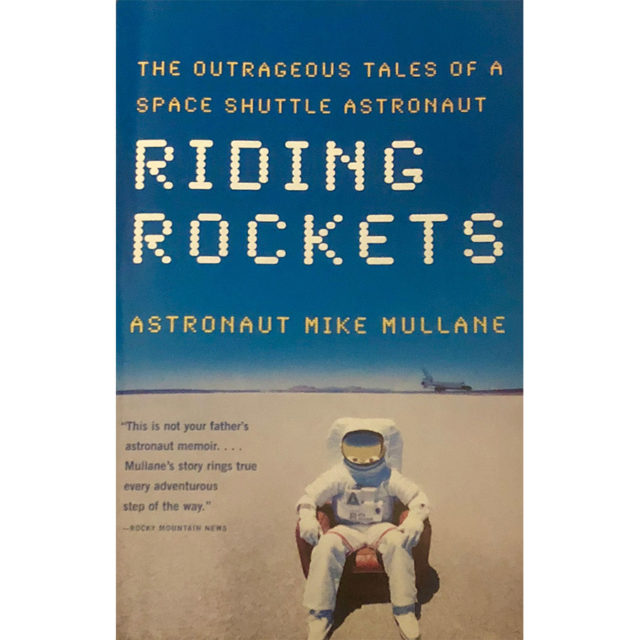 Buy from AmazonBuy a signed copy from the author

Joining my father-in-law for breakfast at the local Denny’s, I slid into the booth to face a full wall panorama of a Space Shuttle launch. We chatted with his old co-workers from Kennedy Space Center over our meal, listening to stories about their old bosses and day-to-day work during Apollo. C.B. piped up. “I worked on the third stage and they told me never to talk to the astronauts.”

“I talked to them every day!” Jim countered. My father-in-law was in charge of the crew module and LEM on the third shift during the Apollo missions. Neil Armstrong handed him his lunch. He’d been in the blockhouse for John Glenn’s launch. And just the other day, John unearthed a certificate that his dad received to commemorate his presence “between the hours of 1437 and 1438” on “11 June 1957, when Atlas Missile 4-A was launched on an historic, limited-range flight from AFMTC Complex 14.”

When I walked to the restrooms at Denny’s, I paused to look at the fading photos on the walls. They captured the exuberance of the Shuttle crews, several dozen crews out of 33 years of missions. Among them was a familiar face. Mike Mullane.

For Christmas, I’d picked up Riding Rockets, Mullane’s memoir about his years as a Space Shuttle astronaut – a book I’d learned about from a friend – and surprised John with it. He’d just finished reading Bringing Columbia Home, written by a friend and colleague he’d reconnected with at last year’s Rocket Ranch Reunion. I thought he might be ready to embrace a bit more of his past. The end of the Shuttle program was hard on him. He’d started at Kennedy Space Center as a clerk before the first Shuttle arrived, and worked his way up through a procession of interesting positions including being on move crew and landing crew, ops desk, and years of planning and scheduling. Over the years, he’d guided planning for all three compartments of the shuttle: aft, payload, and crew module. Although he’d worked on all of the orbiters at one point or another, Atlantis was his mainstay. Before we met, space was his life.

John took to Riding Rockets with intense concentration, diving into Mullane’s memories on the Space Shuttle program. One night, however, he said something that surprised me. “This bursts the bubble on astronauts. They were just like us.”

After I’d had my turn to read the book, I understood. For years I’ve heard John and his dad talk about pranks the workers played on each other. I found that at odds with my perception of the perfection and drive of the space program until I heard similar stories from dozens of new friends who’d worked at Kennedy Space Center too. I’d grown up fascinated by space and wanted to become an astronaut. That dream faded when I hit my late teens – and there still wasn’t a woman in the program – when I realized the only way in to the astronaut corps was as a fighter pilot.

As Mullane explained, he thought he’d need to be a pilot too, so it was a shock to be selected as a Space Shuttle astronaut after he’d applied, and even more of a shock to military men like himself to discover the astronaut corps opened up to “post-docs” – scientists of every background, race, and gender. For flyboys, this went against the natural order of things, and they had an uncomfortable time adjusting to having women in the room.

Mullane’s book knocks home a central theme, that being an astronaut is a job, and a dirty and dangerous one at that. For decades, starting with the ticker-tape parades in the 1960s, our society has held the title of astronaut in high regard, putting these workers up on a pedestal. Public relations wrapped a difficult and uncomfortable type of work in a sheen of glamour. Mullane strips that off, starting with the TMI opening. To become an astronaut, he and the other candidates – for you do not earn your astronaut wings until you’ve traveled 50 miles above the earth – put up with indignities that most of us would not, from invasive medical tests, awkward bathroom procedures, a lack of privacy, and the reality that their job had a higher probability of killing them than most jobs do.

I was so shocked to read that every Space Shuttle could be remotely exploded by NASA in the event it might crash into something more important than the personnel onboard. John confirmed that every spacecraft – from the first Atlas rocket onward – had that built in, even the Shuttle. It was heart-wrenching to learn that at each launch, spouses and children had to stand atop a building and watch, so if their loved one didn’t survive they’d be whisked off home away from the press. So for every launch delay, both astronaut and family had to go through this stress over and over again. It is horrifying to realize that the children of the Challenger crew watched their parents die. And while I’d read about it back then, it still upset me greatly to read again that NASA knew about the o-ring problem from the earliest of the Shuttle missions, and even the engineers from Morton Thiokol told them not to launch on that cold January morning in 1986.

Mullane recounts this and other issues – all reported by the astronauts, noted by engineers, and dismissed as within tolerance – that led to acceptance of “normalization of deviance” because of the rapid pace at which launches were expected to happen. For instance, Mullane recounts that his mission, STS-27, had over 700 damaged heat tiles on descent. They had SRB foam detach and strike the shuttle. John said both foam shedding and tile damage was normal on every mission. Yet downtime was never taken for engineers to rethink why these things were happening, until Columbia came apart on re-entry.

Having served on three Space Shuttle missions – STS41-D, STS-27, and STS-36 – Mullane recounts the intimate details of each, from what it feels like to be stuffed into a confined space and stuck there for delay after delay, unable to move, to the exhilaration of floating in space, looking down upon the earth, recognizing landforms. He provides context to the astronaut training program, talks in-depth about the inscrutability of NASA managers, and notes the many personality conflicts that blossomed, but never took the astronauts off-task from the work they were doing.

I found Riding Rockets both educational and entertaining. While Mullane’s story is also an autobiography, the context of his life reinforces the fact that space travel captured his attention as a kid and focused him forward on the goal of becoming an astronaut. That having supportive parents and a supportive spouse can get you to acheive your dreams. It’s no wonder that his post-astronaut career is as a motivational speaker.

While this book is a memoir, it’s also a window into the dangerous realities of the space program. It’s always been experimental. There are no guarantees. While it’s uncomfortable to talk about, more people will die in space. Mullane frankly discusses his agony over losing his colleagues on Challenger, particularly Judy Resnik, who he flew and worked with on STS41-D. The ongoing pain of that loss is evident up through the closing of the book.

Being an astronaut is being the person who puts yourself through the toughest training and the greatest risk with each launch. Being that person takes a willingness to sacrifice everything for the personal satisfaction of being one of less than 600 people in the United States who have achieved that title. That’s why Mullane, and the other astronauts, were encouraged to walk around in their flight suits and meet and greet the personnel – like John, and Jim, and C.B. – who put them into space. To let the people who did the work know that the astronauts had families and hobbies and quirks and foibles, too.

And that, I see, as the greatest value of this book. It’s an unvarnished, sometimes apologetic, insider’s look at what it was like to be put on a pedestal when you knew you were just like everyone else, but had the “cool job title” and the baggage that came with it that no one else but your fellow astronauts would ever see. For that, I have to say thanks, Mike, for giving us your window into that world.

Learn more about Mike Mullane
Get a signed copy from the author
Purchase this book from Amazon.com