You are here: Home / Library / The Precipice 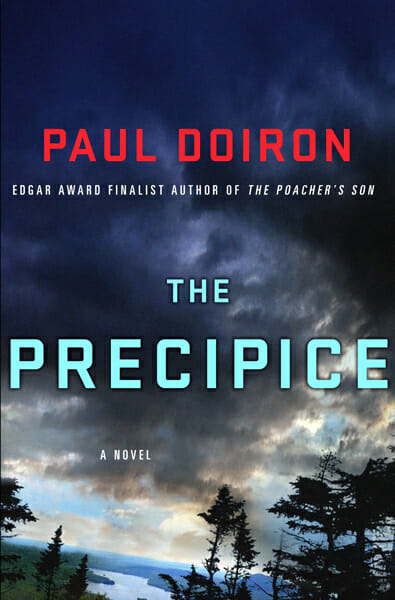 Purchase on AmazonPurchase for Kindle

One thing the Appalachian Trail has no shortage of: steep dropoffs where a slip would be fatal. In Paul Doiron’s newest mystery in the Maine woods, The Precipice, the AT and its thru-hikers take center stage. Activity centers around Monson, the gateway to the Hundred Mile Wilderness, and its hiker hangouts, all fictionalized, of course. Ross’ Rooming House feels an awful lot like Shaw’s, complete with the “leaning tower of pancakes” served up to Mike Bowditch, the Maine game warden who tells this story.

The Hundred Mile Wilderness is enough of a challenge on its own. I’ll admit when I saw the back cover blurb about “two missing girls in the Hundred Mile Wilderness,” I cringed, thinking of the still-unsolved mystery of Geraldine Largay, vanishing in 2013. From an article about her in the Portland Press Herald, “About 500 people are reported missing in Maine each year, and almost all of them are found within 24 to 48 hours, according to the Warden Service. It’s not uncommon for hikers to get lost on the Appalachian Trail – 281 miles run through Maine – but it is unusual for a hiker not to be found.”

I asked the author if this unsolved disappearance sparked his new mystery. “I had actually thought of doing a novel set on the AT a number of years ago,” said Paul. “The romance of the trail makes it such a compelling setting. But it wasn’t until Gerry Largay disappeared that I began to think about specific stories I might want to tell.”

His personal acquaintance with many of the wardens and volunteers who worked on the search helped provide inspiration and information, but as always, the novelist’s mind runs wild with possibilities. “One of the realizations I had in writing the novel was just how easy it would be for someone to disappear, especially in an area like the 100 Mile Wilderness.”

In Bowditch’s world, two hikers vanish after leaving Monson. The mystery unravels at an accelerating pace, with Bowditch and his biologist girlfriend Stacey chasing down clues as fellow Maine wardens follow parallel leads. With a cast of characters that includes a hermit-like former thru-hiker who held the speed record for the trail, two very different hostel owners, a suspicious section hiker – and a cross-section of Monson residents – it’s a roller-coaster ride of a story once the disappearance is solved and the real work begins.

An advance reader copy was provided to us for this review.