Taking on a history-rich segment of Michigan’s Iron Ore Heritage Trail was satisfying as a bike ride and as a cultural immersion. Now if only I’d stayed on the trail…

Reading up on the Iron Ore Heritage Trail, we knew it stretched 47 miles from the Lake Superior waterfront in Marquette through a series of small mining towns to the west. Once we picked up a map and saw the profile, I said “it’s all uphill!”

Of course, it isn’t. Trains ran on this grade. But the westbound stretch from Marquette to the Michigan Iron Industry Museum looked daunting. So when Carol Fulsher, the Administrator of the trail, suggested riding west from the museum to Ishpaming through the richest portion of the trail’s historic sites, I was all for it.

Now John could have easily ridden there from the Cedar Motor Inn, where we were staying. The desk manager showed us how the trail crossing was only a half mile away, but it required riding down the bike lane of US 41 to get to the connector road. I know better than to try that. As we drove that route, we saw a couple with panniers on, heading north. John looked on wistfully.

The entrance to the museum should have been a clue. It was entirely uphill. Which meant, of course, riding the brakes to the bottom, where a half-mile connector led to the Iron Ore Heritage Trail. Pavement yielded to cinders, and the hills began. For me, they were a challenge, since I’m still learning how to shift properly.

We stopped at a crossing of the Carp River, which weaves through the same terrain as the bike path.

While the path eventually became pavement, there was another steep stretch beyond a railroad crossing.

Here, the trail had left the old rail bed and wound through the woods. I ran out of gears and had to push the bike up the last little bit.

We met people walking, and a father and young son on an ATV, using the paralleling OHV trail. Carol told us a heartwarming story about an elderly man who would walk the 16 miles from Marquette to Ishpeming when the trail was first created, in order to visit his wife. He couldn’t drive any more, and she was in assisted living. “When I realized he had nowhere to sit, I made getting benches along the trail a priority!” she said. He would ride public transit back to his home.

Carol orchestrates the volunteer effort that goes into maintaining and improving this trail, which means everything from trail cleanups to metalworkers and artists developing signage and interpretive information. The trail spans 12 counties, most of which financially contribute to its maintenance through a sliver of property tax funds and ORV funds.

At the top of that very steep hill, we’d entered the mining district, obvious from the piles of tailings everywhere. Having grown up in a mining region, I was familiar with the terrain. Like my hometown, iron mining was the reason for the landscape looking like it did. “The ground is rusting!” said John. 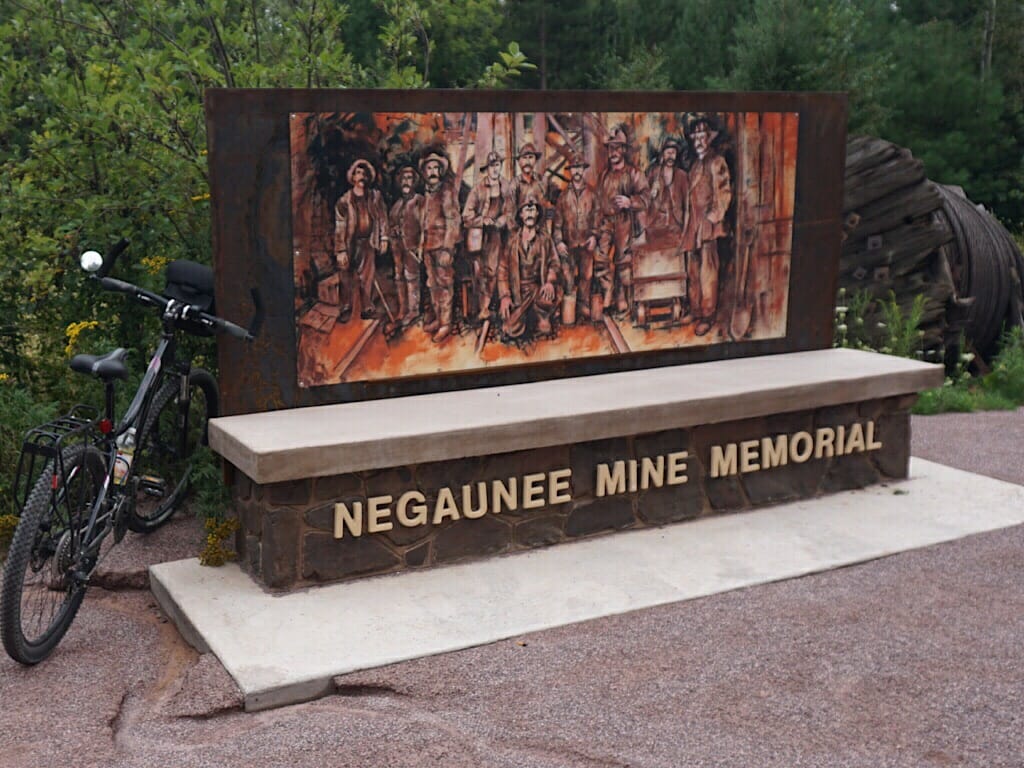 Around the bend, we came to a memorial for the first terrible mining accident in Michigan history: January 7, 1902 at the Negaunee Mine, a cave-in at the bottom of the shaft. “Without warning, thousands of tons of ore came down,” said the sole survivor. 51 died, entombed beyond the reach of rescuers. That spelled the end of the “unluckiest mine” in the Lake Superior District. The only bright spot was the timing, as the tragedy could have been far worse had not 150 men been on the surface at lunch.

We also passed the location of the old Pioneer Furnace, the first commercial charcoal blast furnace in the Lake Superior region, which smelted the iron ore coming from the much earlier Jackson Mine, which we would encounter soon.

Reaching Negaunee, John was tempted to peel off and ride through town to photograph the architecture. But Carol said there would be much more of interest ahead, and we could return for lunch. So we spent some time roaming through Jackson Park, reading the interpretive displays and looking at artifacts.

I was intrigued that the old mine pits were all along this next segment of trail, but fenced off. As a kid I was scolded time and again for wandering into the woods on my own as our area was riddled with mine pits and shafts. I learned to stick to beaten paths.

Just outside Negaunee, beaten paths followed along the edges of these fences. Mountain bike trails! These were created by the Range Area Mountain Bike Association, or RAMBA. They led to interesting places and circled the big pits.

And that’s what got me into trouble. If I’d behaved myself all would have gone smoothly. After all, I’d seen the sign at Lakenenland the day before.

But I tried to ride the narrow plank at the Ramba Skills Course. And failed. This was my second spill this trip while attempting to go off-road. Except this time, the bicycle seat was in my hand when I hit the ground. I tried to put it back on and couldn’t figure it out. It wasn’t broken, just slipped off of whatever held it in place.

John came over. “That’s not supposed to come off,” he said. He tried slipping it back on too, but there was no give to do so. Since it was past lunchtime, i suggested they ride back to the car while I walked the bike back to Negaunee, and they could meet me there.

By walking – my tried and true method of seeing the world – I noticed so much more than I did on the bike. The rich undergrowth beneath the birches. Especially when I spotted ripe raspberries.

The rusty bike hung in a tree above a crazy hill on the Epic Trail piece of the Rusty Bike Trail.

The rocks and minerals thoughtfully arranged atop fence posts. 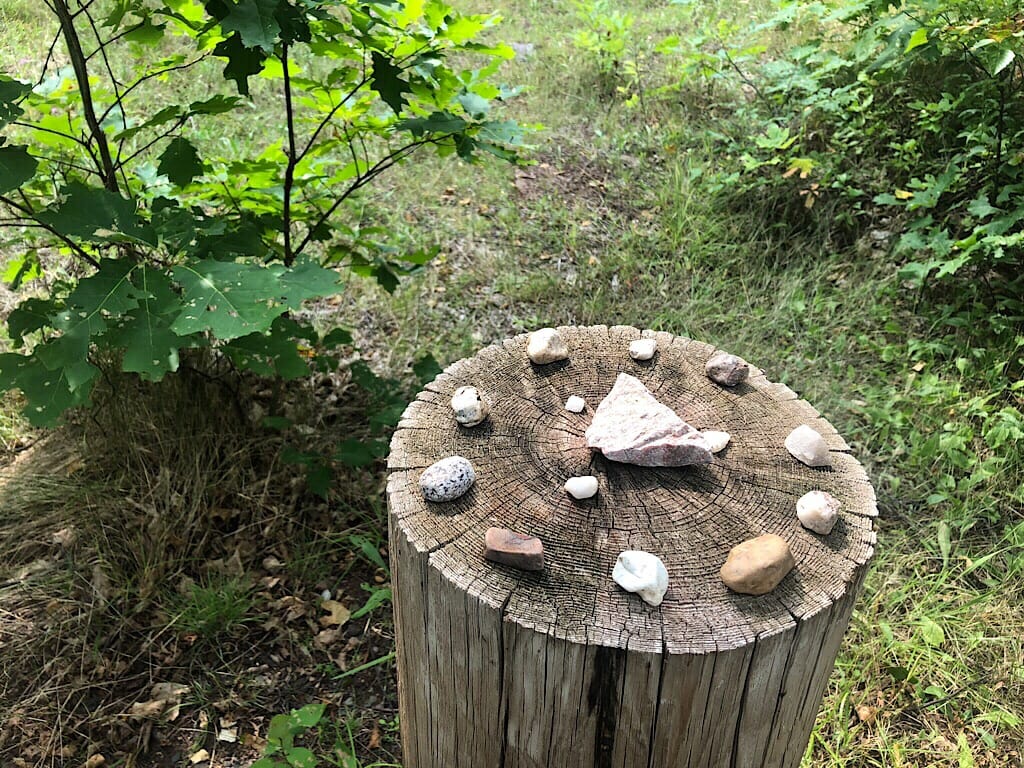 The many interpretive panels about mining history.

My favorite: realizing, after I’d seen a half dozen of the ore cart shaped signs for the vast network of Ramba mountain bike trails between Negaunee and Ishpeming, that the shape of the ore piled in the cart differed on each one, as it was a contour map of the ride. Now that’s clever.

When I reached Jackson Mine Park, I could see there was more beyond the artifacts in the parking area, and a gazebo where I could wait. So I called John and arranged for them to meet me there.

I’m glad I did. Carol had pointed it out to us on the ride out and said it was a must. It is. It was somewhere between Negaunee and here in 1844 that surveyor William Austin Burt realized his team’s compasses were going bonkers. He and his survey crew found the reason: iron ore, of which some types like magnetite have strong magnetic fields.

As we learned later in the day while watching the “Iron Spirits” film at the Michigan Iron Industry Museum, Jackson Mine was the first place iron ore was extracted in the region. The name came from a partnership of downstate investors from Jackson, Michigan.

Walking into the mine itself felt like a homecoming. It’s a big pit surrounded by the ore body, beautiful banded hematite and jasper. 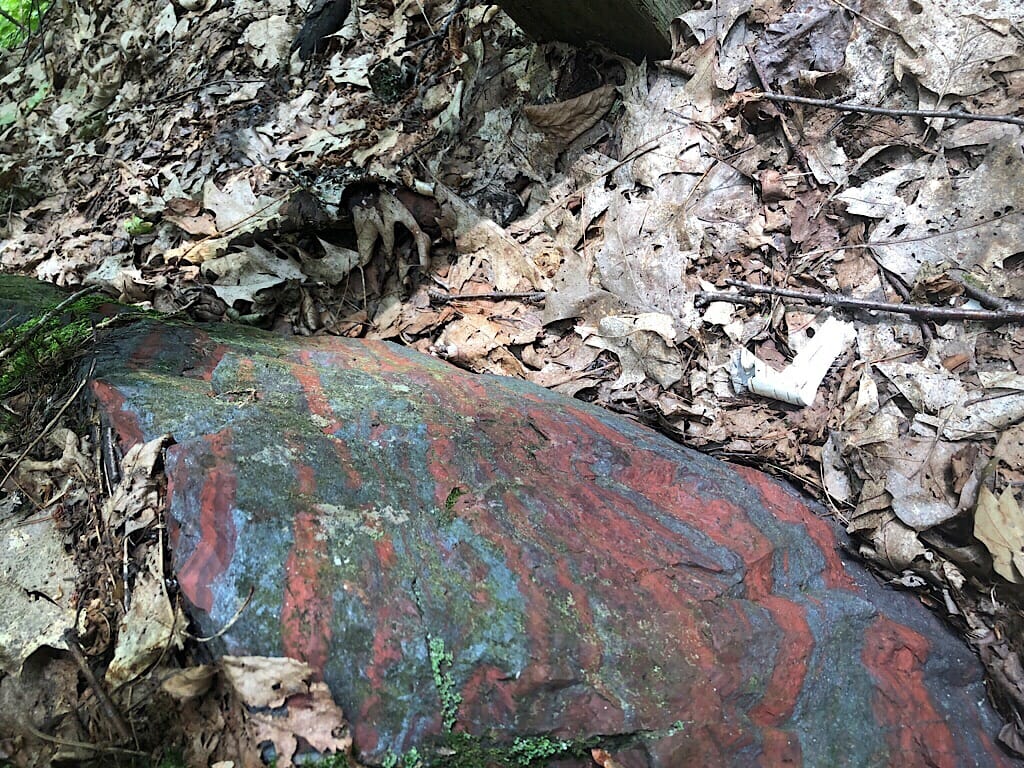 Owned by the city, it’s cared for by civic clubs. A boardwalk curves around above the deep water-filled pit, leading to a gated adit. In the film we watched later, we saw this very spot we stood on, bustling with the extraction of ore.

Birches grew up the steep slopes, where boulders of ore perched precariously. It is a bowl of beauty and a conundrum, for it was ground zero for the iron ore production of the Great Lakes. The ripple effect of this one spot – from the evolution of Great Lakes freighters to the locations of steel mills in neighboring states to the use of steel in buildings, automobiles, and everyday life – is simply astounding.

Awed and more than a bit hungry, we continued into Negaunee, where Carol led us to the Midtown Bakery & Cafe for a satisfying meal.

We dropped her off at her car and headed on to tour the Michigan Iron Industry Museum, a must for making sense of all of the pieces of the iron mining puzzle along this route. 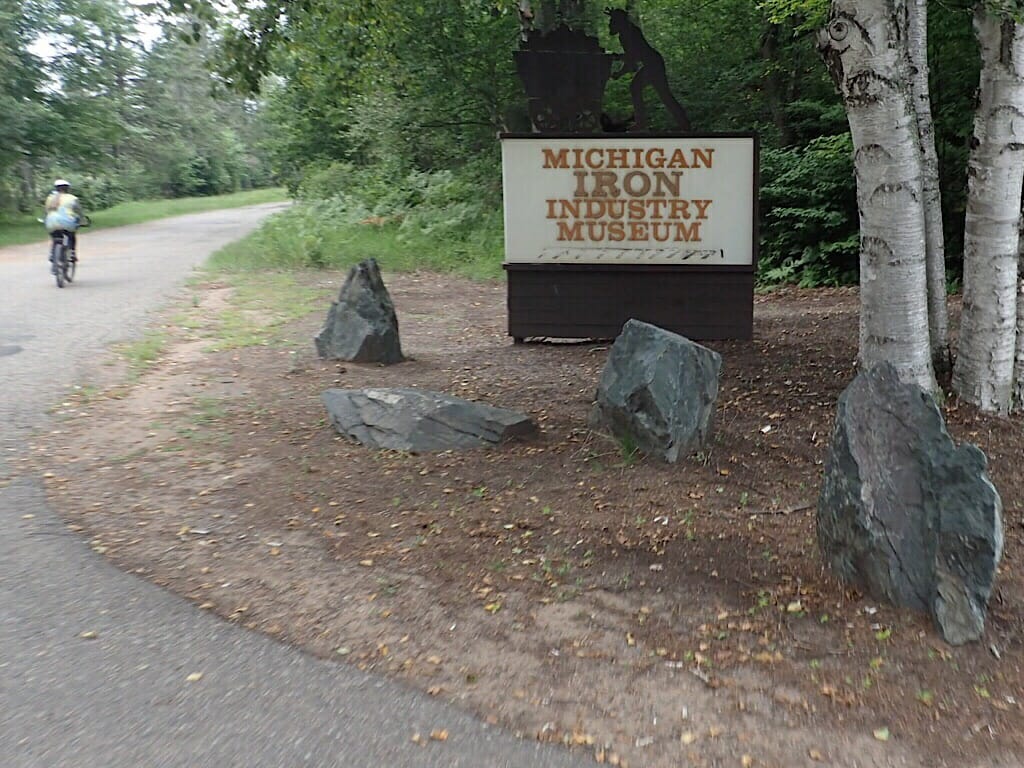 Perched on the rim of a cliff above the Carp River, the museum sits above where the Jackson Forge smelted iron ore into workable blooms that could be hammered into bars of iron. Looking at this wooded glade, it was as dissonant as envisioning the Jackson Mine in full production.

What both locales say with their beauty: nature will erase the ravages of man upon the soil of the earth.

We left with enough time to see about a new bike seat, and in this bike-friendly town, found one, Quick Stop, within sight of where I’d tried the local sausage, cudighi – a spicy Italian dish pronounced koo-dee-gee – at Vango’s the night before.

I learned a lot of lessons on today’s ride, from how immigrants brought in to work the mines shaped this region, from nature’s reclamation of mining landscapes, and how and where not to take my bike. As I told John, I do need to subscribe to his philosophy: Cowards Live Longer. 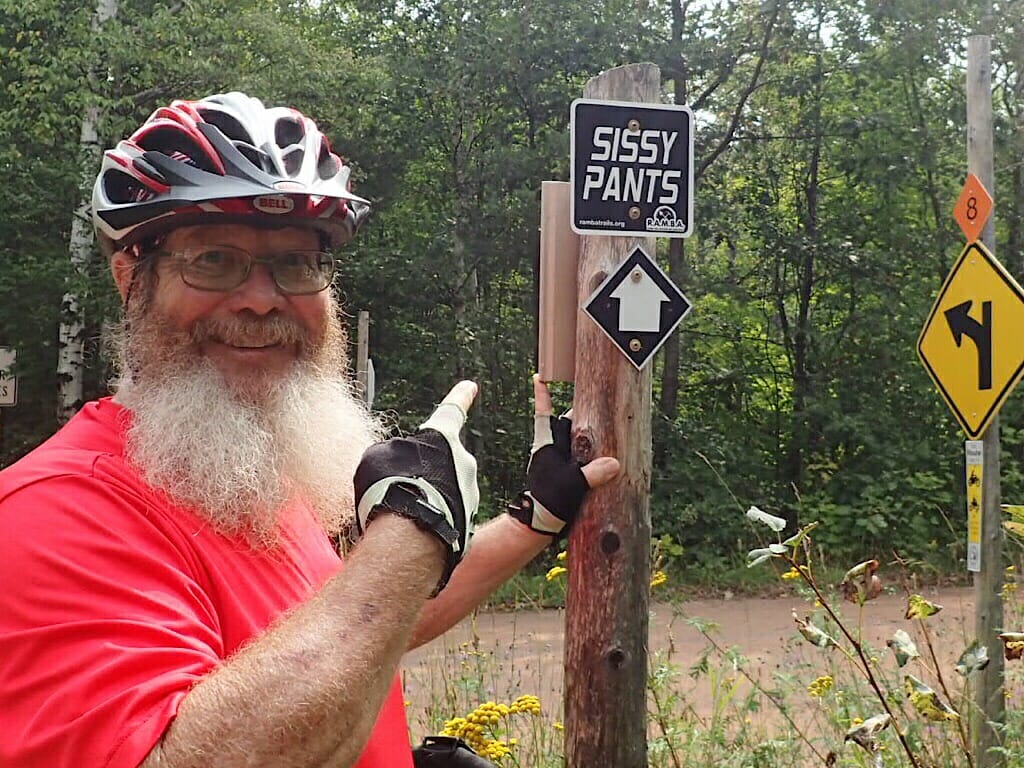