With its Scandinavian sensibilities, sense of style, and amazing geologic formations, Iceland is a compelling destination filled with naturally dramatic scenery. 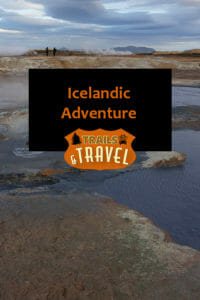 Between its Scandinavian sensibilities and amazing geologic formations, Iceland had been on Sandra’s radar for more than twenty years. It took a conference to prompt us to take the plunge.

One strange thing about this land of fire and ice: trees are rare. Mosses blanket lava fields that stretch off into the distance. We arrived at the end of the summer rush, weather slipping into fall bluster.

Several days in the northernmost part of the country, with Akureyri as a base camp, enabled us to see the billowing smoke and glowing red of Bardabunga, an active volcano in the distance. The Northern Lights appeared for us, too.

On guided day trips, we toured ancient volcanic features like Dimmuborgir, a maze of hardened lava, and the Námafjall Geothermal Area, with its furiously bubbling mud pots and fumaroles. We visited outlying communities and even got to ride an Icelandic horse.

During our conference, wandering the capital city, Reykjavík, was a delight on foot. We went with guided tours to explore more, including the Blue Lagoon and the geologic wonders of the Golden Circle. Waterfalls, geysers, and the continental rift valley were all a part of the fun.

The biggest surprise of the journey was that we were able to grab a direct flight from our home near Orlando via Icelandair, at an airport only ten minutes from home by taxi. 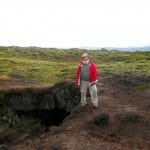 Exploring Lava Tubes in Iceland - John takes his own Journey to the Center of the Earth down a lava tube in Iceland with the author of Icelandic Caves, Björn Hróarsson, as his group’s guide. 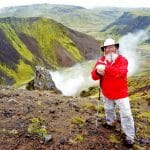 Hiking across an Icelandic volcano - John takes a hike across Hengilssvæðið (Hengill), the nearest active volcano to Reykjavik, with boiling springs and other geothermal features along its 140 km network of hiking trails. 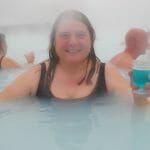 Iceland’s Blue Lagoon - The world's largest hot tub is in the world's coolest country. Iceland's Blue Lagoon provides a superb soak in mineral-infused waters at a spa unlike all others. 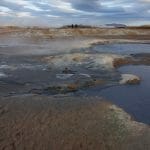 Iceland’s Hot Stuff - Iceland is hot. Our September 2014 exploration of the country let us come face-to-face with steaming hot geologic features that are otherworldly in nature. 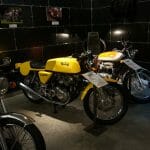 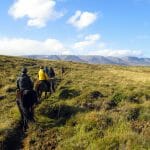