Our first cruise together was on the decidedly elegant and romantic Nieuw Amsterdam out of Fort Lauderdale to the Caribbean, with stops at Half Moon Cay and Nassau. While a working trip, it was extremely relaxing. 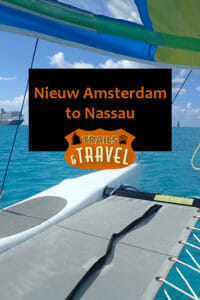 Cruising to the Caribbean for a long weekend sounded appealing, especially since we’d never done a cruise together. In fact, Sandra had never set foot on a cruise ship.

The opportunity arose to join a floating meeting at sea aboard the Nieuw Amsterdam, a classy mid-sized Holland America Line ship where the staff to guest ratio is nearly 1:2.

Since departure was from Port Everglades in Fort Lauderdale, about a four-hour drive for us, we decided to try it out. And we were duly impressed.

The ship was small enough that you never felt lost, and had a sense of elegance throughout, from the artwork to the cuisine to the attentiveness of its staff.

We had two ports of call on this journey. Half Moon Cay, a private Bahamian island that Holland America Line secured for guest use more than two decades ago, is a lush nature preserve. Of course, we found plenty to see and do while on shore.

The next day was spent in Nassau, enabling us both to get our first taste of Bahamian life as we rumbled around town with our group, hopscotching from attraction to distillery to distillery. The final day was at sea.

This was the last cruise for the Nieuw Amsterdam in December before it headed into drydock for an update. Decor in the staterooms and common areas have been updated since our cruise, along with some major changes in the forward deck where we spent a lot of our time scanning the seas, reading, and sipping cappucino.

Disembarking in time to meet a friend for breakfast in Hollywood, we spent the rest of our day roaming the Greater Fort Lauderdale Area visiting natural areas and a distinctly different classic car museum devoted to a prime collection of Packards. 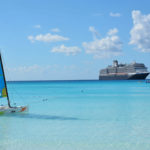 Island Triathlon on Half Moon Cay - While cruising the Caribbean on the Nieuw Amsterdam, our first port of call was the private island of the Holland America Line, Half Moon Cay. It was an ideal day for an island triathlon: bike, paddle, and sail.