Perched atop Lookout Mountain above Chattanooga, Rock City is an iconic rock garden and vintage theme park that the whole family will enjoy.

Ever since being a kid traveling with my family through North Carolina and Tennessee, I remember the red and black barns and the birdhouses that proclaimed “See Rock City.”

That’s it. Not where, not why, and certainly not with a URL back in the day. If you wanted to find out what it meant, you’d ask an innkeeper. I remember at Sun Plaza in Silver Springs in the 1960s, they had both stamp machines and a rotating mileage chart to attractions of interest. Rock City was among them.

It took more than 50 years for me to finally see Rock City after seeing those first ads for it. The timing was right: blue skies, light traffic, and a stay the night before just an hour up the highway. It was along our route. So we climbed the winding road up Lookout Mountain.

I’m sure that Rock City has changed a lot since the 1960s. Starbucks. Multiple parking lots with friendly fellows waving us to a parking space. A sea of people. I began to have some regrets. I’m not fond of crowds. Perhaps a Labor Day visit wasn’t wise. Especially with a surcharge on the ticket because it was a “music weekend.” That wasn’t why we’d come.

A few minutes in, once past the gauntlet of shops and fudge and snack bars, I was more at ease once we started down the Enchanted Trail. It brought together three of my favorite things: geology, botany, and hiking.

Rock City is laid out along a trail, but it’s far from linear. It dives deep into clefts in the earth through what I’ve known all my life as rock mazes, eroded pinnacles of rock along the edges of ridges.

It’s preserved, ironically, because of a developer. Garnet Carter created a club called Fairyland atop Lookout Mountain in 1926, followed by cottages and a subdivision. His wife, Frieda, designed homes and a gas station. She was fond of the fairy tales of her German heritage, and imported storybook character statues for the community; if you drive through it you’ll see street names like Peter Pan Rd and Red Riding Hood Trail.

Frieda wanted a rock garden in their backyard. She figured out a pathway by stretching string between the massive rocks and through the crevices, ending up at Lovers Leap. This is pretty much the route that the Enchanted Trail follows today.

The Carters opened their rock garden to the public on May 21, 1932. An attraction was born. It was well off the beaten path, however, so that’s where the barns came into play. Garnet hired a sign painter to travel around and offer to paint barns for free as long as they had the red and black See Rock City added. It worked! The farthest flung barns were in Texas and Michigan.

The Enchanted Trail is enchanting. It clambers in, out, and over the rock mazes, with stairs here and bridges there. You always feel that you’re moving along in three dimensions as there is usually something going on above and below.

Trees and plants had interpretive tags, adding an arboretum aspect. The trail had low walls along it, befitting how the stonemasons first figured it out. In some spots, you’d look over and into deep crevices, where voices filtered from below.

The maze-like quality extended into a “choose your own path.” No wonder they handed us a map at the ticket booth. We took a side trail that led us to the ADA accessible trail called Legacy Lane, and ended up out at Lovers Leap, realizing by the flow of people that we’d come the wrong way and skipped a bunch of the main route. Whoops!

Hanging out over the edge of Lookout Mountain, you can easily see downtown Chattanooga off to the north. Georgia is below and south. 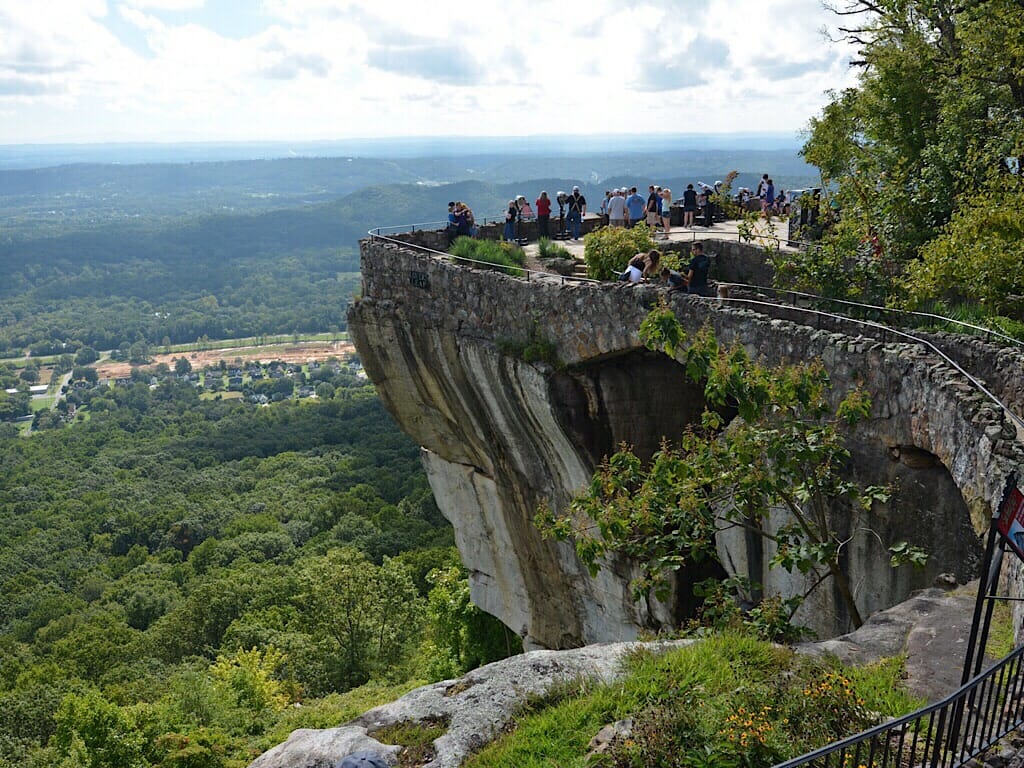 “See Seven States” is the tagline they use, borrowed from Civil War correspondence. On a clear day like today, it was still a stretch to think that the far horizon held Kentucky, North Carolina, South Carolina, and Virginia. Alabama is on the other side of Lookout Mountain so I wasn’t sure how to see it, either.

We eventually backtracked – passing Prospector’s Point twice – and found the Enchanted Trail again, but not without catching a preview of the bridges to come.

You can choose from a rock-solid stone arch bridge or a long span suspension bridge to make your way out to Lovers Leap. Both have their own high points, so to say.

Meandering between the rocks, with deep cracks in the earth on both sides, I was delighted that the original low stone walls along the footpath are still in place. Rock City trusts that you’ll keep a close watch on the kids and stay on the path. Again, we could hear voices down below, in the deep crevices.

At the bridges, I chose the suspension span. I can be terrified of heights – actually, as comedian Steven Wright would say, “I’m not afraid of heights, I’m afraid of depths” – while John took the stone bridge. I didn’t look down, but I was not happy with the kids in front of me intentionally making the bridge bounce and sway. I should have known that would happen.

After another circuit past Lovers Leap and the 7 States Flag Court, we began the descent into a deep slender crevice called Fat Man’s Squeeze.

We’d already threaded the Eye of the Needle, but this was much tighter. I found walking sideways along the wall helped.

After a dip through a cavern, the trail emerged in the rock forest and made its way out to the edge of the cliff, a level below Lovers Leap. This afforded a view of High Falls and a different perspective on the valley below.

Linking the two big overlooks – Fairy Glen and Observation Point – the clever Rainbow Tunnel made use of natural light filtered through colored glass.

More geologic features, like the 1000-ton Balanced Rock and the Stone Witch, were linked by a series of caverns (rock shelters, really) and rock gardens.

With the emphasis on winding through the rock mazes, I wasn’t expecting caverns. So our descent into Fairyland Caverns came as somewhat of a surprise.

It seems that Frieda Carter was quite fond of gnomes in addition to fairy tales. Add 1940s vintage sculptures by commissioned artist Jessie Sanders, fluorescent paints, and black lights, and this underground walk through Frieda’s version of Fairyland was a bit trippy.

The faux stalactites gave away that this wasn’t really a cavern, but another deep spot in the rock maze, with walls and portals added for effect. Still, it was fascinating to pause at the many vignettes.

Mother Goose Village, the largest room, led us around a rectangle dominated by a castle and the illustrative statuary. We both caught a few nursery rhymes that we’d never heard of before.

After that dose of retro in Day-Glo, it was jarring to pop up into the main gift shop and the entrance plaza full of people.

I’d planned to pick up one of their iconic birdhouses or birdhouse Christmas ornaments, but was sorely disappointed to discover they were made in China. Given the region’s deep well of artists and crafters and the fact that Rock City is still under the care of Garnet and Frieda’s descendants, along with its legacy of barn-painting promotions, I’d expected some “Made in Tennessee” or “Made in Georgia” handcrafted promotional items. No luck.

If we lived nearby, I’d want an annual pass to explore the crevices, overlooks, and gardens in more detail. I would have walked through again, even. But our afternoon plans were set, so it was time to say goodbye to Rock City.

Learn more about Rock City. It’s open year-round, although the road to the top of Lookout Mountain can be daunting in less-than-ideal weather. They host a variety of special events year-round.