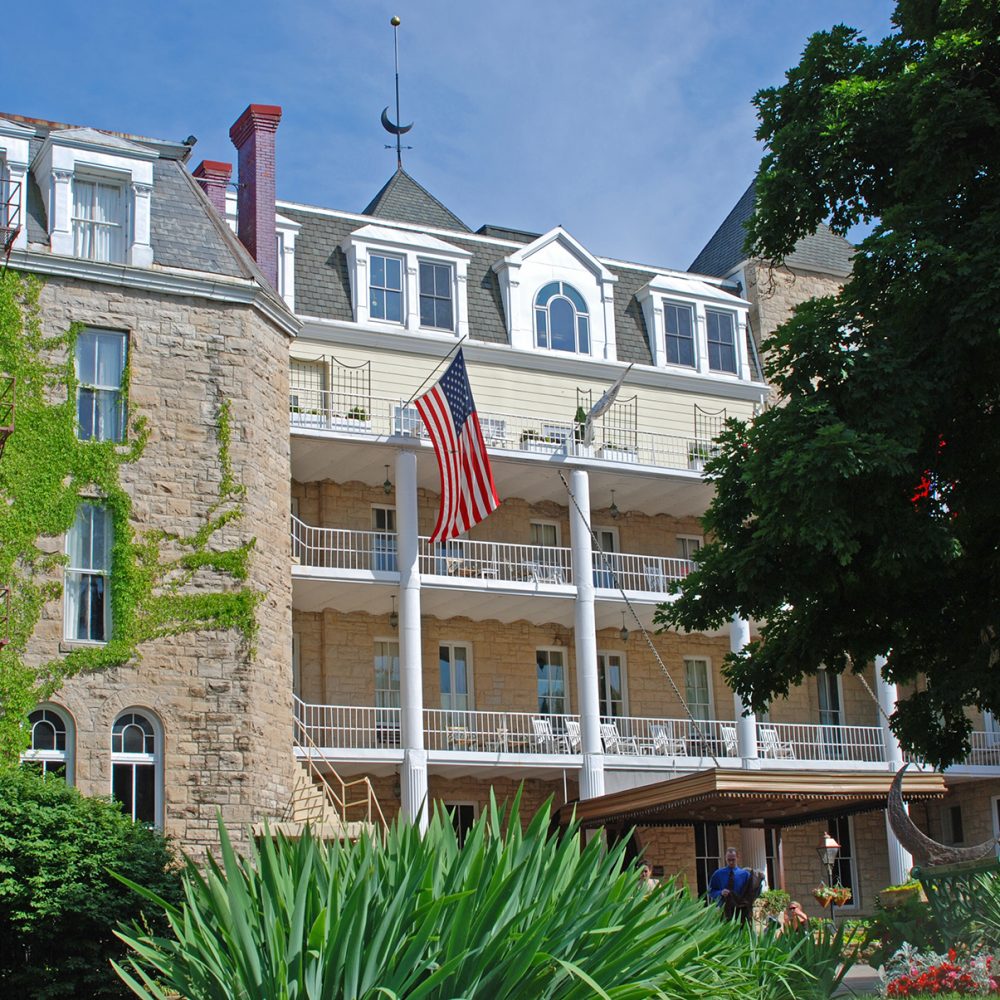 If you’ve done a ghost tour, you know the drill. You slip through ordinary places at night while your guide tells creepy stories with a historical backdrop. Some hand you a device to measure something. Ectoplasm? Vibrations? It’s stock-in-trade for destinations with a strong sense of history, like Eureka Springs, Arkanasas.

Tonight’s trek is through the hallways and public spaces of the Crescent Hotel, where I’m staying. It was pitched as a haunted hotel, so I knew what I was in for. I am not a ghost hunter, by any means. Up until this night, my brushes with the paranormal were strictly personal. Until we tunneled into an old kitchen prep area in the basement of “America’s Most Haunted Hotel.”

It was well after the dining room had closed. I saw no floorboards above with cracks. Other folks on our tour came and went from this rough little room as our guide talked about the bodies that Dr. Baker kept down here, victims of his “cancer cures” in the 1930s.

I smelled a distinctive smoke, a cigar. And as I walked through one corner of the room, I felt a chill. The hairs on my arms stood on end.

Although it’s firmly in the lushly forested Ozarks, Eureka Springs is seriously weird. Unlike Austin’s claim to weird, this this isn’t a modern phenomenon. Robert Ripley documented it for decades. At least a dozen times, his “Believe it or Not” cartoons highlighted something not quite right here, like the fact that no two streets meet at a right angle, or that you enter St. Elizabeth Catholic Church through its bell tower. Designated a National Historic Site in 1970, the entire city is a well-preserved Victorian village, not something you’d expect to find in the middle of these mountains.

In the heart of Eureka Springs business district, downtown vanished underground after a spell. Main Street – also called Mud Street – was always muddy because of the nearby creek. Owners kept elevating buildings on retaining walls until some ended up a story or more below, turning ground floors of some businesses into basements. Yes, there’s a tour for that. The Eureka Springs Downtown Underground Tour lets you walk through the weirdness below, which I sampled with a private peek beneath the Grand Central Hotel and a lunch with friends in the below-the-street Mud Street Cafe. Stare at the bricks at the top of the staircase down into this diner, and you may catch the message: it’s a not-so-subtle signal for a bordello.

Eureka Springs had its Wild West days, which set the stage for weird. The James Gang and the Dalton Gang shot up the place. After years of terrorizing stagecoaches, banks, and trains throughout Arkansas, Oklahoma, and Kansas, Bill Doolin, founder of the Wild Bunch, was arrested in the Eureka Springs Bathhouse by a Federal Marshall and hauled away.

What made Eureka Springs so unique? In part, topography; in part, its magical waters. Sixty-three springs bubble and gush from crevices in the hillsides, some notable, some tiny, all under a lush canopy of forest. The Osage traveled for great distances to immerse in the “Great Healing Spring” later known as Basin Spring. In 1856, Dr. Alvah Jackson opened Dr. Jackson’s Cave Hospital to treat wounded soldiers during the Civil War, believing that the waters cured his son’s eye troubles. One of Jackson’s friends found a cure for his skin condition in Basin Spring, and Eureka! A town was born.

Established July 4, 1879, Eureka Springs quickly became the fourth largest city in Arkansas and a resort town overnight, with shanties and tent cities adjoining the bathhouses. Water from Harding Spring still flows into the Palace Bathhouse, just as it did in 1901; it’s the last of the original spas in existence. Dozens of hotels sprung up, among them the Basin Park Hotel. Built in 1905, it’s notable for being set into a steep mountainside, enabling guests on all eight stories to step out of their balconies onto the ground floor. Honest.

On Eureka Van Tours, our Victorian-costumed guide led us not just to Ripley’s favorite haunts but to more modern outposts of weird. Among them, a distinct landmark you can’t ignore, visible above all points of the city: Christ of the Ozarks. This two million pound, five story tall concrete statue makes you think of Christ the Redeemer over Rio de Janeiro.

Gerald L. K. Smith, who commissioned this sculpture in 1966, is buried at its feet. He jumped-started tourism in this town, but was known for a lifetime of “hellfire and brimstone” sermons filled with antisemitism and hatred. At the statue, we came across the Museum of Earth History, which explained how dinosaurs and Adam and Eve shared the land. The museum has since closed, but the Great Passion Play, said to be the largest such biblical pageant in the world, continues, joined by a Bible Museum with a 1611 King James among its 7,000 holdings.

Architecture is weird here, with wedge-shaped buildings and buildings that cascade downhill. Being a rock collector myself, I caught the vibe of Quigley’s Castle right away. This 1940s home is a big piece of art, surrounded by bottle trees and covered in rocks cemented to every surface, not just the house but the outdoor furnishings as well.

A counterpoint to the chaos of Quigley’s weirdness, Thorncrown Chapel rises from the forest floor as if it grew amid the birch and beech, in perfect balance with its surroundings. Designed by E. Fay Jones, a protégé of Frank Lloyd Wright, this architectural marvel brings the outdoors in through its nearly transparent walls of glass. It’s a major destination for weddings – and Sunday Services – but is worth the time simply to walk inside and mediate in the quiet.

My freaky ghostly moment came near the end of the tour through the Crescent Hotel. From the outside, the hotel gave me the creeps. When I moved into a room, it felt creepy and I had freak-out moments during my stay. The whole place had me unsettled. Now I’m not big on picking up vibes, but this building had its evil moments, as I found out later, on the tour.

While the Crescent Hotel started out as a hotel, it became a sanitarium owned by “Doctor” Norman Baker. Baker’s claim was a cure for cancer, and on the airwaves he owned, he broadcast hope. Moving to Eureka Springs in 1938 after he was arrested in Iowa for practicing medicine without a license, he began his scam anew. Cancer patients came for the “cures,” homemade elixirs injected into their bodies. He made a huge profit, and his patients died. The untimely, unnecessary, monstrous deaths continued in this building until the federal authorities carted Baker away in 1939 for mail fraud. He was never indicted for his “cancer cure” deaths.

After learning of Doctor Baker’s cures, I didn’t feel too great about visiting a local doctor and pharmacist when I got sick during my visit. Luckily for me, both recommended the use of a neti pot – something I’d never heard of before – to help clear my infection. That Eureka Springs find still sits by my sink to this day.

Eureka Springs haunted me for some time after this visit, but that’s a tale for another day. If you’re keen on chasing ghosts, by all means, head for the Crescent Hotel. If you’re not, you have plenty of bed & breakfast options to choose from, plus the historic hotels downtown. Embrace the weird: take on Eureka Springs. It’s not what I expected to find in the Ozarks, but it certainly is funky, and beautiful.

Eureka Springs, Arkansas, is an hour east of Bentonville, hometown of Wal-Mart, via US 62. Ironically, there are no Wal-Marts or other big box stores here. For a stay in the center of it all, the Basin Park Hotel can’t be beat for location if you’re exploring the city on foot. At the top of the “most windy road in America,” the Crescent Hotel pitches itself as “America’s Most Haunted Hotel.” At over a century old, both hotels have their singular quirks and documented haunts, so I’d suggest you scope them out and see if you are comfortable with them first before booking a room. The B&Bs are a great option, as are the safari lodges at Turpentine Creek Wildlife Refuge, a must-visit for wildlife lovers. US 62 has a lot of small motels and chain places, too.

For your own take on the weird, sign up for one or more tours to get the full backstory on Eureka Springs. In addition to the very different ghost tours presented at the Crescent Hotel and the Basin Park Hotel, try the Eureka Springs Downtown Tours for some very unique offerings. Eureka Van Tours gets you out to the more far-flung sites like Christ of the Ozarks and the Thornecrown Chapel.

If you’re not up to walking the steep hills of Eureka Springs, use the Eureka Springs Transit trolley bus, which connects all points of interest. Parking is extremely limited along the city streets and somewhat difficult because of the steep terrain, but there are central parking areas near downtown.