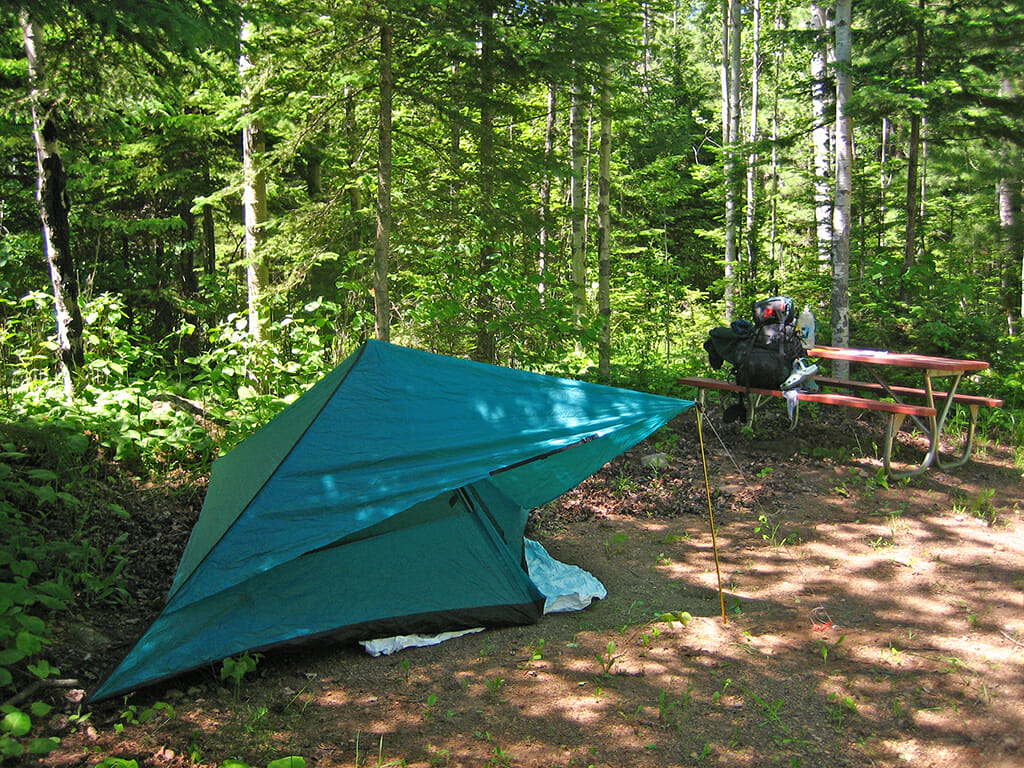 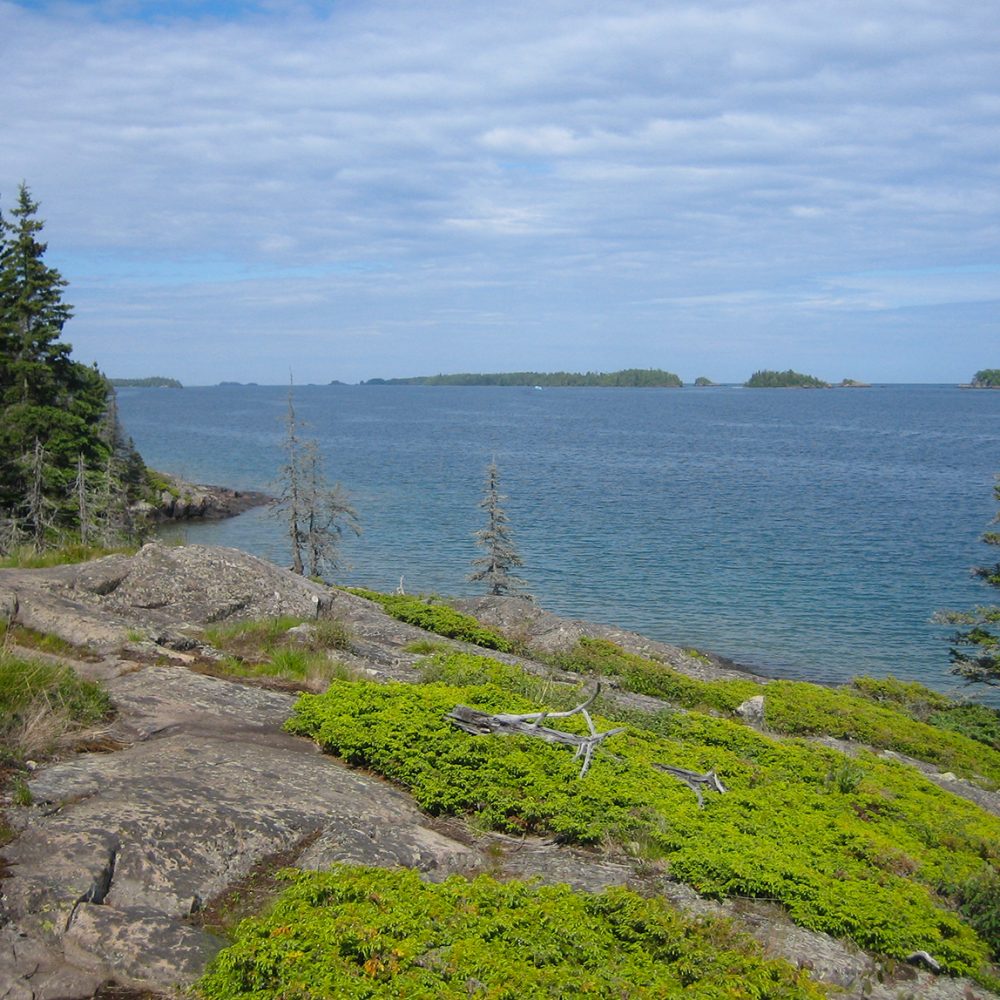 It’s June, and the mosquitoes are relentless. I set my tent up in a clearing high on the hill above McCargo Cove, and I feel like I’m in a coffin. It’s a small backpacking tent, just big enough for me and my pack, with seams and zippers doing their duty of keeping the mosquitoes out. When I accidentally brush up against a screen, they stick me with their needles.

I spray myself liberally with bug dope and head down the trail, hoping to find one of the camping shelters open. On the way down, I stop, entranced. Wading through the shallows of the marshy cove is a moose, grazing on plants in the water.

Ninety-five percent of visitors to Isle Royale National Park are backpackers in search of solitude. Since less people visit this 45-mile-long island each season than go to Yellowstone National Park in a day, you’re guaranteed a quiet time. Most visitors head straight for a primitive campground such as Moskey Basin or Daisy Farm and stake a claim on a shelter for a night or two: the view is worth so much more than the small day use fee, and you can day hike a loop or two out of most of the campsites.

I wanted to traverse the rocky spine of the island, so I chose a pricier option: a water taxi drop-off halfway down the island. I knew I had a limited amount of time, so I pre-arranged a ride out to McCargo Cove so I could spend three days in the woods and still return to Rock Harbor in time for the next ferry. Doing so gave me the chance to explore.

After establishing camp, I hiked up the Minong Trail to visit the pits and ore piles of the Minong Mine, a relic from the 1800s when copper mining provided a livelihood to those hardy enough to work here.

Established in 1940, the National Park prevented further human alteration to the landscape. There are no roads, and structures on the island are concentrated at Rock Harbor and Windigo, ferryboat launch points at the two ends. Without human interference, the forest is around the mine site is quiet. Aspen leaves rustle in the wind. Mosquito drones stand out in vivid relief. The soft crinkle of a rain jacket, the movement of fabric, becomes a distraction. And then a loon’s cry breaks the silence.

I thank Nevada Barr. Had I not read A Superior Death, I wouldn’t have known about this slice of the North Woods in the middle of Lake Superior. It’s not easy to get here, but that’s the beauty of it. After three or four hours on a ferryboat – I was lucky to cross on a calm day – you trundle out on the dock at Rock Harbor with one last chance to pick up food, gas for your stove, and gear.

After an orientation session with a ranger, which includes a Leave No Trace seminar and tips for hiking the trails of Isle Royale, you get your backcountry permit and head off. With 165 miles of trails to roam and 36 backcountry campgrounds with nearby water sources and privies, you have many options for your journey. Pick up a Trails Illustrated map of the island prior to your trip to plan out your route, since you have to specify on your permit which campsites or shelters you plan to use.

Alone with the Wild

“Ow-woo-oo, ow-woo-oo. . .” A wolf’s howl echoes across the clear water of McCargo Cove as I rise at dawn, looking across this finger of Lake Superior from the cozy comfort of the camping shelter. After watching the moose graze, I found a shelter open and took it over, trundling all my gear down for the night’s stay. Good thing. It poured all night.

It’s raining as I’m packing to leave, cold and wet. I break camp with one thought: keep moving. Mosquitoes collect thickly. I’m told they are worst in June, and am thankful I brought my headnet. The footpath is a narrow unblazed corridor amid soggy ferns and other vegetation that slaps me with water again and again. I only find signage at trail intersections.

I walk on plank bridges across burbling streams and cranberry bogs, watch moose grazing in the distance and walk through mud decorated with wolf tracks. The trails are rugged but no more so than hiking in the Appalachians, especially up on the Greenstone Ridge. This narrow spine, an escarpment of rock, runs the full length of the island and provides many spectacular views. I can see the Canadian coastline, only 25 miles away.

Cold rain soaks me to the skin as I clamber across slick basalt boulders. I’m hiking solo – not my preference, but how it worked out – and with layers of rain jacket, poncho, bug net, and Tilley hat, I must look a sodden sight as I crawl up to the ridgetop and encounter two young men in t-shirts laughing the rain off as they head in the opposite direction.

As I reach the southern shore on the Rock Harbor Trail, the clouds part, and blue skies open up over Mott Island, the park headquarters. I run into a few hikers in the campground, but very few. Along the lakeshore, I see more old mine shafts. Clusters of yellow lady-slipper poke out between patches of rock. A heady aroma rises from the wet needles of balsam fir.

I pass less than a dozen backpackers, as the busy season is between mid-July and mid-August, when insects are few and days are warmer. Bright orange and yellow lichens paint scenes on the jet-black slabs of basalt slipping into the blue waters of Lake Superior. These rugged rock formations jut into the lake, providing me a place to soak up the warmth. As the sun breaks through the clouds, I lay out my soggy gear to dry.

Isle Royale National Park is part of Michigan but lies within view of Thunder Bay, Canada and Grand Marais, Minnesota in the blue expanse of Lake Superior. Its public season is very short – April 16 through Nov 1 – because of its extreme winter weather and dangers of traversing the lake the remainder of the year. July and August are the busiest and most temperate months to visit. The day use fee is $7 per person per day, which is in addition to the cost of the ferryboat. Backcountry permits are free.

To reach Isle Royale, I took the Royale Queen IV, which departs Copper Harbor, Michigan at 8 AM daily during the season and took three hours to get to the island. Before you reserve your ferryboat tickets, be sure that Isle Royale has enough backpacking permits available for the length of your stay. Other ferry options are available from HMichigan and Minnesota.

Not a backpacker? Book a room at Rock Harbor Lodge and do day hikes from the lodge, or grab a campsite or cabin at Rock Harbor and make it your base camp. Be sure to coordinate your ferryboat and accommodation reservations, as sometimes the ferry fills up with backpackers.