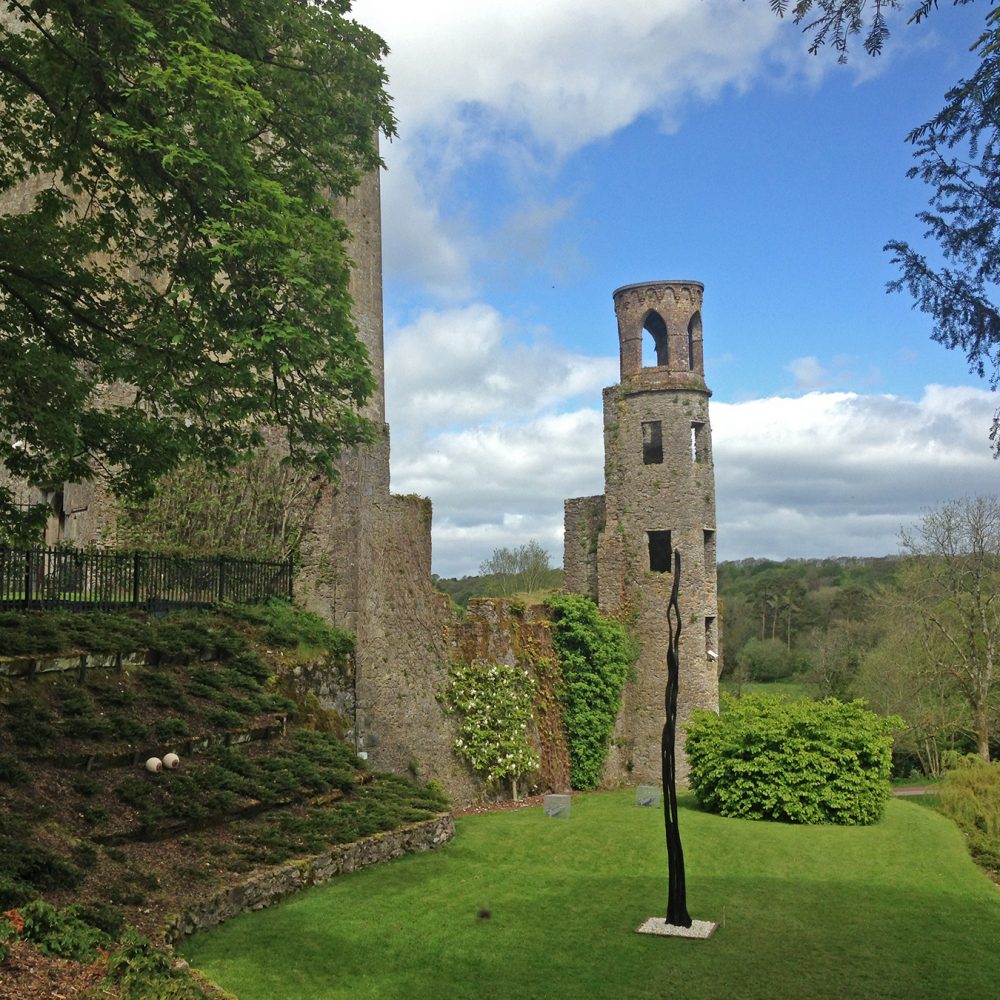 As the long line of tourists – us included – crept through the ruins of Blarney Castle, I kept shaking my head. Kissing the Blarney Stone has never been on my radar, yet here I am, being herded through the maze of unkempt rooms and twisty narrow staircase up a slender tower in a stone structure built nearly six centuries ago, stuck in a line with rambunctuous schoolchildren and half-serious adults.

“Go on!” said our tour director, when I voiced my concerns, looking at the line and the limited amount of time we had for our visit. “You’ll get some great views from the top of the castle. You don’t have to kiss the stone if you don’t want to. There are a couple of bailout points where you can exit the line.”

John’s mom had kissed the Blarney Stone on several prior visits to Ireland. When I first met her, I knew where John got his gift of gab. But she’d fallen quieter in recent years, and now confined to a transport chair, she wouldn’t be visiting the stone again. It was up to us to storm the castle while she watched from below.

Our coach parked in front of the “largest woolen mill in Ireland” in the middle of the village of Blarney, of course, the better to make shopping easier, setting the tone for the visit. On our walk across the village, we ran across many shops selling Blarney souvenirs, as well as a large gift shop at the entrance to the attraction. Most of the inexpensive trinkets were made in China, although Ireland’s famous woolens were also in the mix.

Once you’re inside the gates, it’s a nice stroll to the castle, which sits prominently on the hillside. In the 1700s, the first grand Georgian manor was built next to the castle keep, along with an intimate shade garden called the Rock Close. While that manor is no more, the current one, built in 1874, can be seen from the top of the castle. The extensive grounds are landscaped into thematic gardens, enabling visitors to ramble on miles of trails through the hills and woodlands down to a lake where legend had it that a gold plate was thrown into the waters.

Established in 1210 and rebuilt several times, Blarney Castle is a ruin, but one with stories skillfully told through interpretive signage directing you to notable points like the oubliette that kept out unwanted visitors, the dungeons and their extensive tunnels, the stables that were a part of the manor, and, of course, the legend of the Blarney Stone.

The Blarney story starts with Cormac Laidir MacCarthy, Lord of Muscry, who rebuilt the castle in 1446, making it the most impenetrable stronghold in all of County Munster. A piece of the legendary Stone of Scone, the mystical stone of Scotland, was given Robert the Bruce gave to Cormac’s ancestors for assisting at the Battle of Bannockburn in 1314. That is one legend of the Blarney Stone’s origins. The other sets it as a gift from a witch that Cormac freed.

It was in 1602 that Cormac Teige MacCarthy, Lord of Blarney, stood up to Queen Elizabeth I during a dark time in Irish history. It is said that it was Cormac’s way with words that kept Elizabeth’s agents away from his castle, both in speech and on paper. Upon receipt of a letter from Cormac, Elizabeth is purported to have said “This is all Blarney; what he says he never means!”

Cormac’s silver tongue was attributed to his posession of the Blarney Stone. The wash of politics over the land meant the MacCarthys had to abandon the castle. It eventually came back into Irish hands under ownership of the governor of Cork in 1703. By 1789, a visiting French consul wrote about “a large stone that visitors who climb up are made to kiss, with the promise that in so doing they will gain the privilege of telling lies for seven years.” A tourist destination was born. It’s been perpetuated by generations of visitors, and reinforced by the many writers, actors, and politicians who shared their stories of kissing the Blarney Stone over the past few centuries. All before social media.

As we popped out of the tower to the top of Blarney Castle, we discovered our tour director had been ill-informed. Yes, once upon a time you could slip out of line as you reached the roof. No more. The crossover point to the other side had been blocked with chains that it wouldn’t be easy or safe to crawl under or over.

We were stuck in the slow-moving line, having plenty of time to take in the spectacle on the far side of the wall. A giant flash had been mounted in a way that prohibited visitors from taking photos from a decent angle on their own. Instead, you could purchase a photo after your rock-kissing experience. Each person who came up to the stone was made to lie on their back on a pile of mats and would be pushed out the hole by a fellow who’d obviously had much experiencing in getting people in and out of the awkward dangle in record time. He had a hat set out for tips. Most wisely left a coin before letting him hold them several stories over the moat. At the last minute, my sniffles and sore throat got the best of me. I did not want to share them with everyone else behind me in line, nor did I want to pick up any more wee beasties to add to my travel woes. I stepped past the stone, immediately catching the ire of the large man who’d been dangling the ladies in front of me out over thin air for their lips to meet rock.

“Yer chicken, then?” he said, and laughed. I felt like I had the last laugh as I watched the next lady shoved down the slot in the rock, ingloriously, to press her lips to the stone to keep up the centuries-old tradition – and the centuries-old line of tourists.

Blarney Castle, home of the Blarney Stone, is located in the village of Blarney in County Cork. It opens at 9 AM daily. Closing hours vary by season. The grounds are closed on Christmas Eve and Christmas Day.

Allow yourself several hours for your visit. In addition to spending at least 30 minutes to an hour climbing through the chambers and staircases of Blarney Castle – whether you kiss the stone or not – you’ll want to take the time to peek in the dungeon and ramble through the extensive themed gardens.

With John’s mom in a wheelchair, it took us two tries to realize that the marked wheelchair route led down a long gravel path, whereas the main path was paved right up to the steps at the base of the castle. The castle itself is not wheelchair-accessible, and the gravel path is a rough route for the occupant of the wheelchair. Stick with the main route if accessibility is needed.