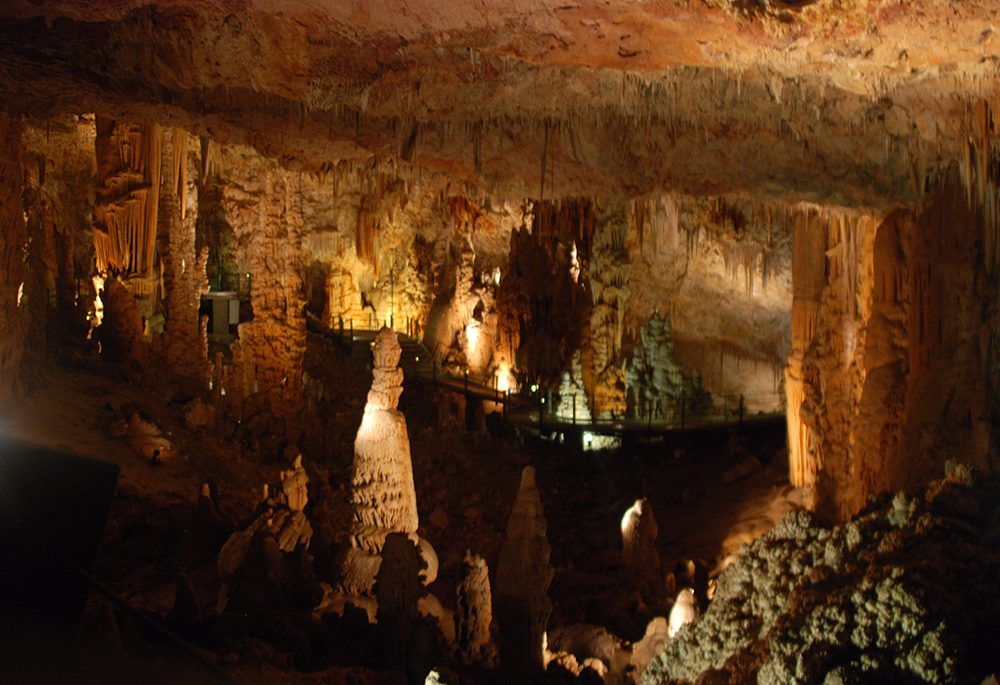 Fingerlings of fog grazed the limbs of cedars as we climbed uphill in a misty rain, our driver negotiating the sharp curves with practiced ease. With plans for an outdoor ramble at Bet Guvrin-Maresha National Park cut short by the thick mud created by the day’s rains – “it never rains in Israel,” said our guide – we were on our way to go underground without getting our boots too muddy, on a visit to Soreq Cave in Stalactite Cave Nature Reserve.

With an entrance exposed during blasting in a limestone quarry along the mountain in 1968, Sorek – also known as Avshalom Cave – is a gallery of geologic wonders beneath the Judean mountains near Bet Shemesh, 32km west of Jerusalem. It is Israel’s only show cave, first opened for tours in 1977.

At the visitor center and parking area, a steep staircase with 150 steps leads down the mountain to the unadorned cave entrance, reminiscent of a mine adit. Double doors create an airlock to keep the cave air in. Despite these precautions, the interior temperature of the cave has risen notably since its discovery.

After a short orientation and film, your guide leads you through the doors and into the cave. For me, it was a moment of absolute awe.

I’ve visited close to a hundred caves across the United States and several more overseas, and have never seen a cave as highly decorated with formations as Soreq. It’s like taking the highlights of all of the major caves along the Appalachian Mountains and compressing them into a handful of chambers.

On our visit, sparkling new renovations were in place along the tour route, with winding walkways separating visitors from the fragile formations while providing panoramas of the cave’s chambers.

Having studied karst for many years, I was delighted to see a few cave formations I’d only read about before, like dripstone walls – curtains of stalactites and stalagmites with flowstone across them – and cave mushrooms hidden in a small chamber within a chamber.

Our guide provided the tour in English, which is typically only done on the first two morning tours. Tours are given in Hebrew the remainder of the day, hourly.

If you’re looking for a specific type of speleothem, ask your guide. Most visitors are simply happy to have shapes in the stones and the shadows called out to them, so anyone who speaks geology is a welcome conversation piece on the tour.

Leaving the visitor complex, I asked if our driver could pull over at a roadside monument that caught my eye. When I stepped out to look at it, it gave me chills. I knew Israel’s first astronaut, Ilan Ramon, had died when Columbia didn’t make it back home, and there was a memorial to him in this park.

But this memorial was different, a work of art. It is part of the original American Independence Park on this mountainside at the turnoff for Soreq.

It put tears in my eyes. I sent John a photo.

“That’s a Space Shuttle nose cone,” he said. He would know. I never expected to see a remembrance of Challenger on a foggy mountain peak in Israel, reaching for the sky above one of the most spectacular places on earth beneath the ground.

Soreq, also known as Avshalom Cave, is located in the Judean Hills of Israel, in Avshalom Reserve. It is managed by the Israel Nature and Parks Authority.