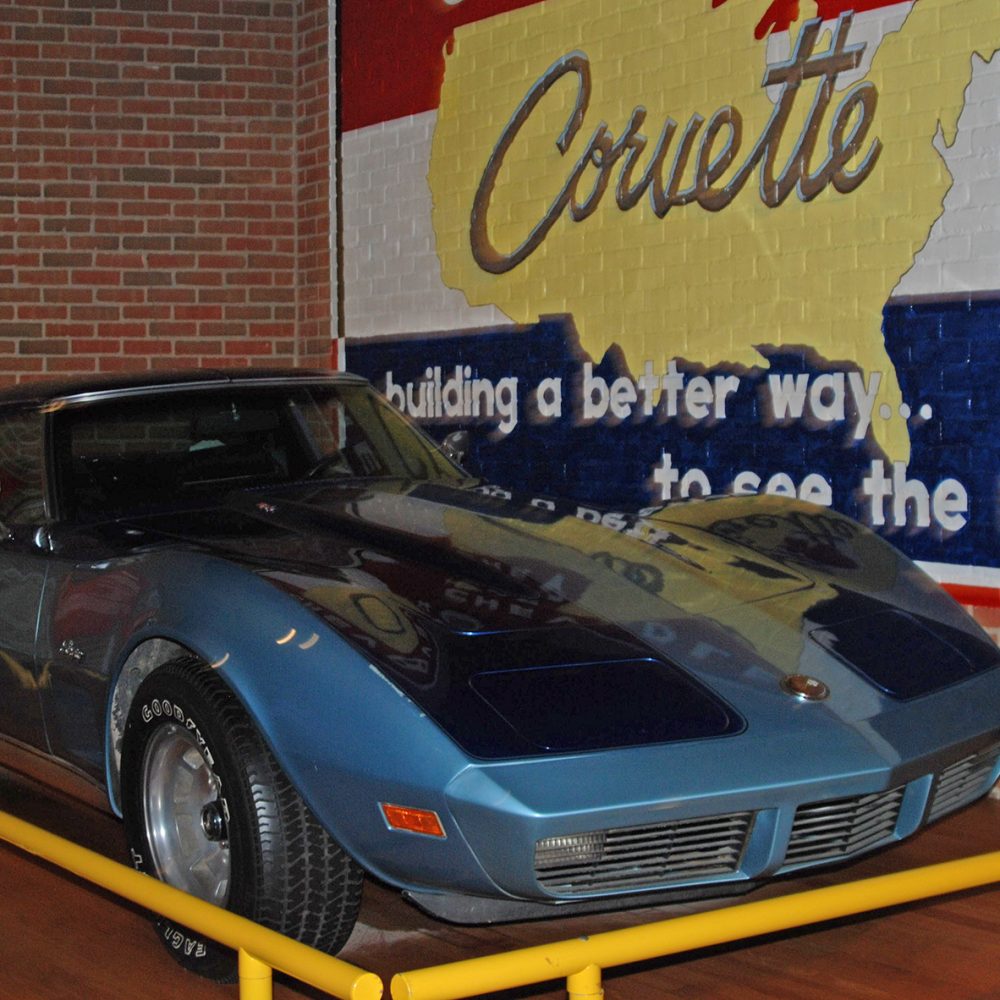 As we pulled into the parking lot for the National Corvette Museum amid a sprawling complex visible from Interstate 65 in Bowling Green, I noticed flags flapping with emblems on them. John pointed to one he knew well. “That’s my old Corvette club!”

Established in 1967, the Cape Kennedy Corvette Club had an impressive pedigree, its ranks swelled by astronauts who’d been given cars to drive by a local dealership. A fair number of folks at Kennedy Space Center owned Corvettes, and they’d take to racing out on those wide, paved spots between the buildings, where it would be a wink and a nod in response because “it’s the astronauts again.”

John has one of those lust-after vehicles, a 1966 Corvette Stingray that his dad bought used when he was twelve years old. And yes, back in those wild years, Dad raced the astronauts in that powder-blue beauty, his daily driver to work on the Apollo missions.

The Chevrolet Corvette is a car with its own cult following, which the National Corvette Museum supports with year-round special events, a Hall of Fame, and member organizations such as the Cape Kennedy Corvette Club. “It’s a lifestyle,” is the mantra you see and hear as you walk the halls of the museum, and I’ve found out firsthand how it gets into the family blood.

While my Dad tended towards whopping big mounds of steel – I’ve never felt comfortable in a compact car in my life – John learned to love that Corvette early on. Following in his father’s tire marks, he picked up his first used Corvette early in 1975, and owned four others over the years. He showed them off at the club shows, and even acted as newsletter editor for a spell. When he decided to trim his Corvette fleet, only that Stingray stayed, restored back to its original glory after his Dad decided he was done with it. People still ask him if he’ll sell it to them.

Thus the mystique. There is no car quite like the Corvette. Launched by General Motors in 1953, it was a car you’d expect James Bond to drive, the sleek look fitting for a dashing gentleman with places to be. The Stingray, the second generation of the car, debuted in 1963, with a bolder definition to the body. Upon entering the main museum space, you walk back through time past some of the rarest Corvettes in existence, including the early concept car. One exhibit honors the original assembly line in St. Louis, Missouri. Production started at the GM Bowling Green Corvette Assembly Plant in 1981, and this museum, opened in 1994 across the street.

Although it has a good variety of interactive exhibits – plenty to keep the kids amused – much of the museum focuses on the Corvette’s role in racing. One room is a recreated pit crew area; the giant Skydome has a section with pace cars from the Indy 500. The Corvette Hall of Fame honors those who’ve made significant contributions to the Corvette, whether it be through engineering and design, racecar driving, or marketing. More than 30 shining vehicles fill this space. Those with a techie background will appreciate the attention to detail shared in the museum gallery on engineering, including clay models and breakaways of the interior to show the chassis and how it is built to be light and strong.

We visited before the Skydome collapsed into a yawning sinkhole that swallowed a bunch of the cars. You can now see those cars – reshaped by Mother Nature – on display, and peer down into the depths of the sinkhole through a window in the floor. To prevent another collapse, the sinkhole was likely filled with grout. A new interactive exhibit puts you in the middle of the collapse on a wrap-around series of video screens.

The National Corvette Museum is the only museum of its kind devoted to a single model of vehicle, and the fact it has 35,000 members says something for brand loyalty. Thousands of owners caravanned here for the grand opening, and clubs regularly make the pilgrimage to show their respect. More than sixty years of dedicated collecting, research, and sharing by local clubs and individual Corvette owners made this museum the world’s top repository for information on the car, the go-to source for restoration research.

In turn, GM works with the museum to show off its future plans for the Corvette. You’ll see the latest concept cars and some of the truly rare vehicles, including the millionth car to roll off the assembly line, and the only known 1983 Corvette. Just 43 prototype models were built that year before GM decided to hold off selling them due to design changes needed to meet the new California emission standards. While GM told their employees to destroy the cars, someone at the plant managed to hide one for many years until they were promised it wouldn’t be destroyed, and it now sits in a place of honor in the museum.

Before we left, I took a picture of John next to a small display in another place of honor with a photo and a patch from the Cape Kennedy Corvette Club. The patch had had been carried into space on the Space Shuttle, the only Corvette memoribilia to orbit the Earth. Since he’d worked on both the club newsletter and the Space Shuttle program, it seemed more than fitting.

Ordering a new Corvette? You can opt for delivery to the National Corvette Museum and pick it up with a technician in attendence from the factory. Choose Museum Delivery Option R8C to pick up your new car at the museum’s showroom floor. While the nearby GM Corvette Assembly Plant is retooling, factory tours are not currently available, but will resume in 2019. 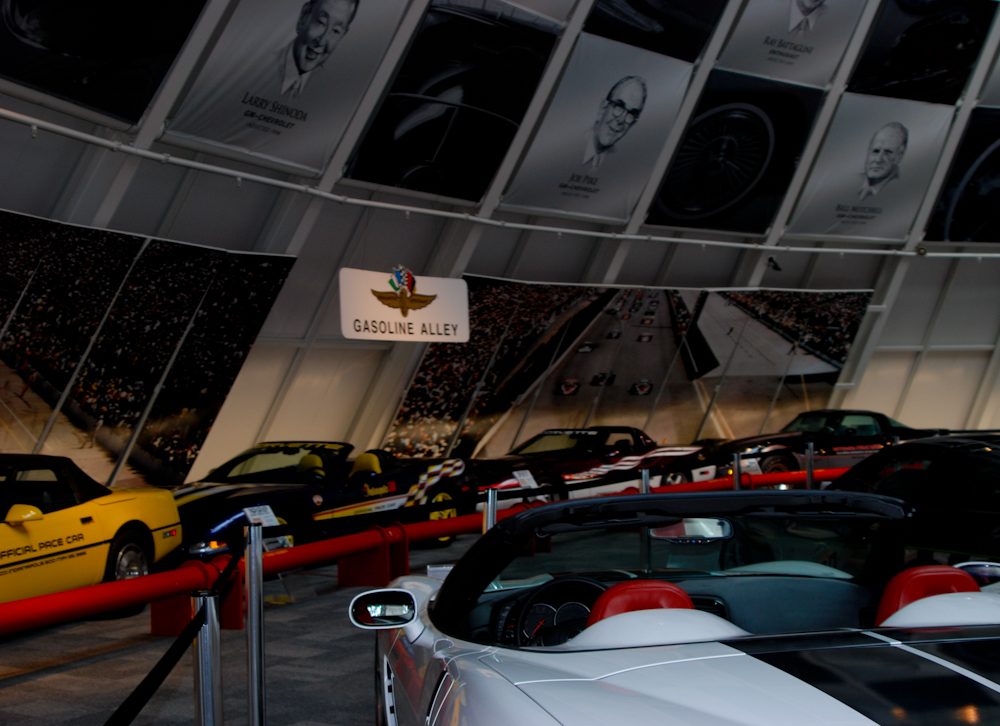 When I was about 12 years old my dad bought a used Chevrolet as the family’s second car.  Little did he know that over forty years later it would still be in the family.  And he could have never guessed how much it would affect my life!

This “work car” just happened to be a Corvette Stingray.  He drove it almost seven days a week to his job at Kennedy Space Center until a heart attack and open heart surgery put an end to his ability to use a race car-style clutch.  Now, after all these years, it sits, restored, in my garage.

In my early twenties, I followed in his footsteps. I was working nearly seven days a week at Kennedy Space Center when I bought my first used Chevrolet, a 1975 Corvette.  Unlike my father’s car, I went for the convertible.  As the years went by, four other Corvettes would grace my driveway.  The only one I kept, however, was dear old Dad’s

When our last road trip had us near Bowling Green, Kentucky, the home of several beautiful caves and the National Corvette Museum, we had to visit.  After spending the morning exploring Diamond Cave, it was off to the museum on a Sunday afternoon.

This museum isn’t the typical “car” museum.  Sure, there are a lot of rare Corvettes that look like the just left the showroom floor.  But there are also very low mileage original cars, custom, and one-off Corvettes.

On display are old factory photos, signed copies of letters from some of the people who helped conceive and improve the Corvette, factory brochures, and dealers’ models, of course.

But what makes this museum different is the dedication of 60 years of Corvette owners.  As we pulled into the parking lot, Corvette Club banners hung from every light pole, including one for my old club, the Cape Kennedy Corvette Club.  Inside, we saw a display of astronaut photos and their Corvettes.  It included a patch from my old club, a patch that had flown on one of the last Space Shuttle missions.  Did I mention that way back when, Dad used to race the astronauts in his old Corvette?  That’s another story.

If you are truly a Corvette fan, the museum is worth a visit. As we were walking out, I watched a new Corvette owner picking up his car.  If you check off the right block on the order form when you order a new Corvette, you can pick it up from the museum floor – after a one-on-one check out with a Chevrolet service person. The factory adjoins the museum and offers tours.