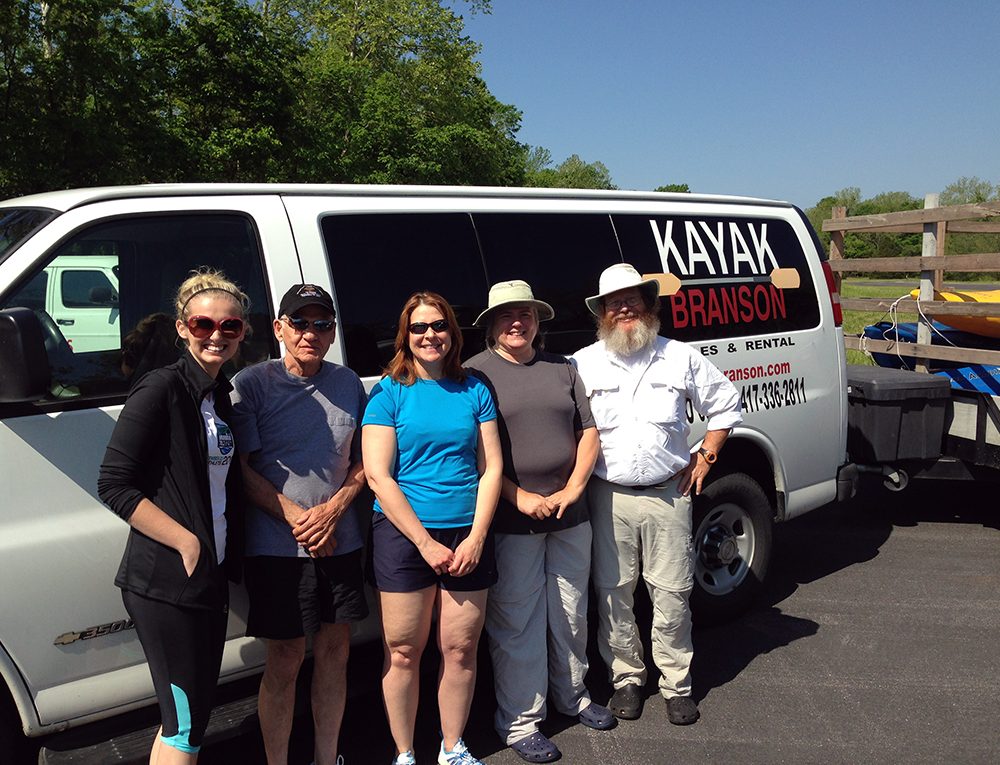 When we signed up for Sandy’s SATW conference in Missouri, neither of us had ever set foot in the “Show Me” state before.

We had signed up for the Nature Tour, which included a kayak on Lake Tanneycomo. The lake is a 22 mile stretch of the White River between Table Rock Dam and Power Site Dam. Sandy hadn’t been in a kayak in several years, and I was a little rusty, so a gentle trip downstream sounded like the perfect reintroduction.

When we arrived at Kayak Branson we learned that the owner was going to be our guide. Rodney and his family moved down from Maine and has been running the business ever since. He said he thought about retiring at sixty-five and then again at seventy, but spending a beautiful day out on the river as part of your “work life” is hard to give up.

While he parked the truck and trailer, we picked out our boats. I pointed Sandy to a nice stable one, while picking put the quickest and tippiest one for myself. Even before entering the river we could see that the water was high and moving fast.

Our friend Roland slipped into the water first and was quickly downstream with hardly a paddle stroke. One by one we pushed off with Rodney bringing up the rear.

I had never been on such a flat sheet of water moving this fast. Once comfortable with my boat, I became the group photographer. Sandy wanted nothing to do with trying to take photos and manage her boat, so she handed the little camera to me.

I positioned myself in the middle of our group, paddling backward, and started snapping away. I was able to catch everyone in our group, taking some great shots of them in action while holding the wrist strap in my teeth as I chased them down. I even caught Roland, who stayed at the head of the pack of the entire trip.

Looking backwards, I was the only one to see the bald eagle fly across the river behind us, skimming less than fifteen or twenty feet above the water. He moved too quickly for me to photograph him.

Cruising down the river we spotted damaged docks and others pulled from their pilings, now tangled up along the shoreline, caught in the trees. At the low point in the river we could see damaged and abandoned homes. A sign at one made a snide remark to the engineers at the Table Rock Dam, who were supposed to control the waters flow to prevent these homes from being flooded.

All too quickly, we arrived at the takeout. What was supposed to be a three hour gentle drift down Lake Taneycomo we completed in less than half the time.

As I was pulling up to the takeout, I handed Sandy the camera. Proof that I had survived my first kayak trip in Missouri!