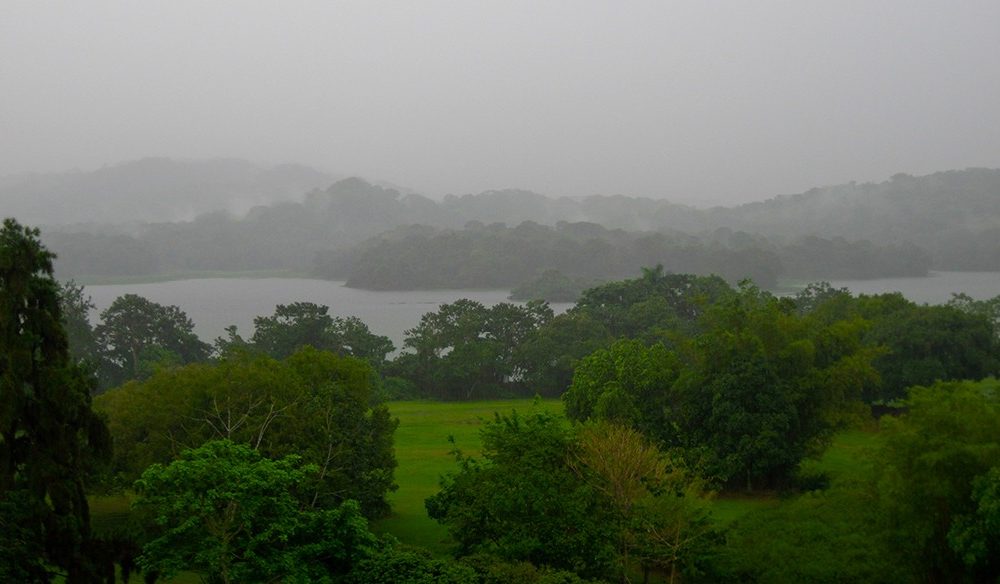 It fell as if scripted. But this was the real thing, and to feel the thunderous power of the Panamanian rainforest was a wondrous thing. We sat on our balcony at Gamboa Resort, not far from the Panama Canal, listening to the thunder echo up and down the river as tropical birds chattered and monkeys fussed. Below, ignoring the downpour, leaf-cutter ants carried leaf cuttings and clippings of bright purple flowers back to their nests under the dripping ficus trees. Steamy humidity rose and filled our room, the weak dehumidifier unable to keep up with the haze. 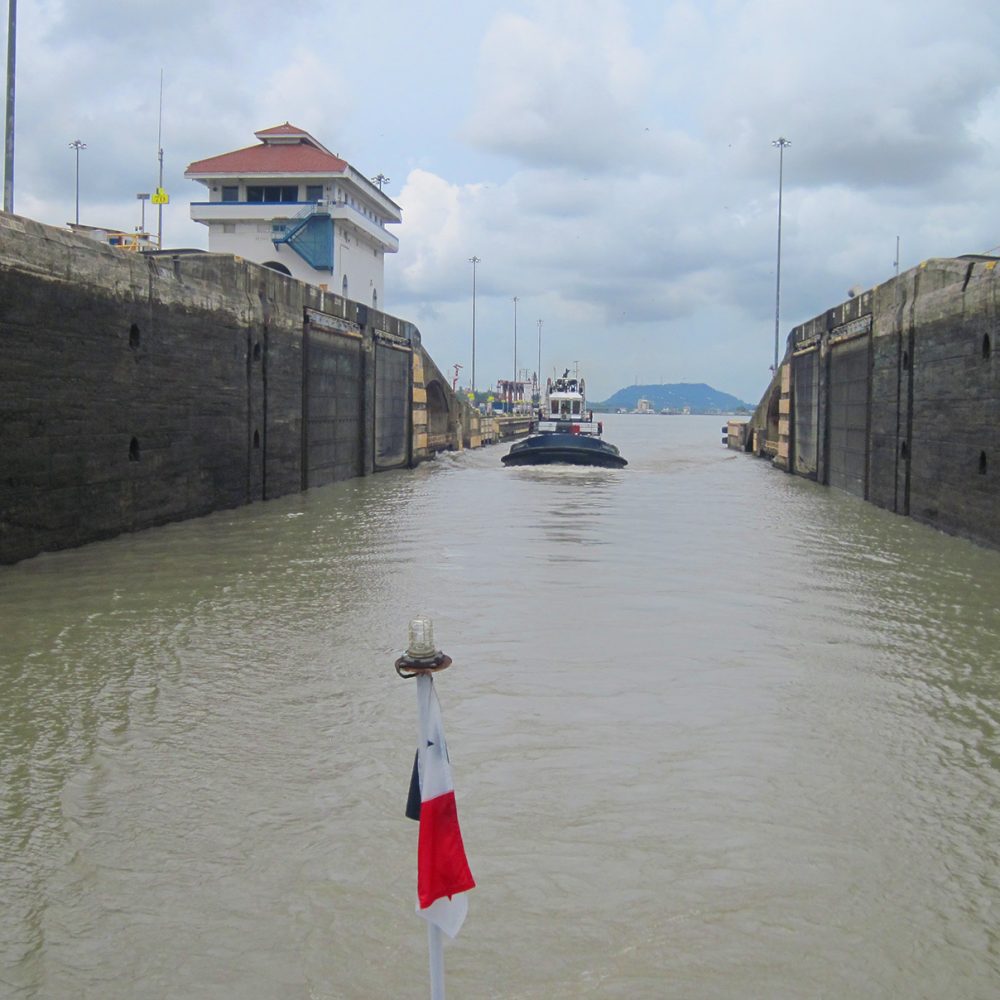 Wind whipped the Panamanian flag against the bright blue backdrop of the Pacific Ocean as a small boat gave chase after our ferryboat. We’d just rounded the Amador Causeway, and slipped into a pre-determined position for transit behind a massive container ship entering the waters of the Panama Canal. Dozens of ships lay at anchor across the horizon.

As our tour guide joked in English and Spanish over the loudspeakers, people milled about the boat, curious about everything that was happening around us. In the distance, sunshine glinted off the skyscrapers that define the shoreline of Panama City, towering above the Pacific like some science-fiction landscape.

In a country of extreme contrasts, on a slender isthmus that is the bridge between continents, the Panama Canal remains an object of world curiousity and necessity. In the 1600s, the Spanish used an overland and water route to move the riches of the New World from Pacific to Atlantic. In 1855, the Panama Railroad transported goods and people between the seas. A French entrepreneur began the first Panama Canal project along the railroad’s route, but the effort ran out of funds. After assisting Panama with their liberation from Columbia in 1903, the United States took on the effort, completing the one of the largest engineering projects ever in the history of the world. It opened in 1914, and was turned over to Panama in 1999.

For a ship to enter the Panama Canal, it’s no cheap proposition. Tariffs span from $800 for the smallest of boats to $375,000 for the largest of cruise ships, and are based on a variety of factors, including tonnage, type of cargo, and passengers on board. Nearly 15,000 ships of every shape and size – as long as they are of “Panamax” size or smaller, able to fit through the locks – transit the canal each year. It’s a multi-billion dollar operation, and the primary driver of the country’s economy. Payable in cash, the fee must be wired in at least a day or two before transit, after which the ship is assigned its place in line at a specific time.

It took less than 30 seconds for a Panama Canal pilot to disembark in the swells and climb aboard our craft. When you transit the Panama Canal, an official pilot must steer your ship. Even the captains of nuclear submarines must give up command to these specially-trained captains, who know both the locks and the vagaries of the man-made and natural waterways along the way.

Entering the Pacific, the Panama Canal doesn’t look like a canal at all. In fact, very little of the canal is a straight, narrow passageway. Only immediately around the locks and through the 8-mile Gaillard Cut, which slices deeply through the mountains of the Continental Divide, do you feel like you’re in a canal. Most of the route uses natural bays, such as the Gulf of Panama along the Pacific, and rain-fed reservoirs that have spread out into large lakes, such as Gatun Lake.

Passing under the Bridge of the Americas – connecting the continents of North and South America – your craft is firmly in the canal route, slipping past sailboats at anchor, dive shanties, and massive docks for loading and unloading cargo ships. But you’re not committed to the transit – other than financially – until you enter the Miraflores Locks.

Going Through the Locks

After a century in operation, you’d think that the Miraflores Locks would show some age. Not so. Their thick Portland cement walls show little stress and weathering. The double-walled steel doors, forged in Pittsburgh, have a green patina like a bronze statue, the effect of fresh water meeting salt water. This collison of waters “is like a sushi bar for the birds,” said our guide, as we noted cormorants and ducks diving into the waters and frigate birds endlessly circling overhead.

A giant arrow points to the side that your ship must enter, as there is a pair of chambers at each lock. Ours joined a container ship from Croatia in the thousand-foot lock, with a pair of tugboats between us like a giant set of bumpers. For most container ships, there is only a six-inch clearance on both sides of the lock. We had plenty of room. To keep the larger ships from banging against the sides of the chambers, pairs of locomotives hold their ropes taut, guiding them in and out of the locks.

To step us up from sea level to the level of Miraflores Lake, fresh water from the lake above flows by gravity through tunnels in the concrete into the chamber, raising the level of the water to fill the chamber within 8 minutes. From our ferryboat, we could watch the water rising up the tiles that marked the depth of the chamber. It can take two steps through two separate chambers to reach Miraflores Lake, due to how much the tides can vary in the Pacific Ocean. As our boat rose to lake level, we came face-to-face with the crowds on the balconies at the Miraflores Locks Visitor Center. We’d been there two days before, watching the transit process from above, so it was even more interesting to be on the other side of the gates.

Gatun Lake – a reservoir that spreads through the vast central rainforest of Panama – feeds the entire canal transit process, making this engineering marvel utterly dependent on seasonal rainfall in the rainforest. To get to Gatun Lake, however, our boat had another set of locks to transit – the Pedro Miguel Locks. With no visitor center adjoining them (unlike Gatun and Miraflores), they can only be seen on a transit of the locks. While they seem smaller than the locks at Miraflores – mainly because they have only one chamber on each side, not two – they’re essential for that last little boost to 87 feet, the highest point above sea level.

From Miraflores Lake, between the locks, we had the best view of the new Panama Canal locks under construction. At each of the three locations along the canal where locks exist, they are creating one more wider, longer lock (180 feet by 1,400 feet) reachable from the same section of waterway. Progress doesn’t look to be far along in most spots; the original 2014 opening date has been pushed to 2015.

Once above the Pedro Miguel Locks, we cruised under the Centennial Bridge, where the Pan-American Highway crosses overhead, and headed for shore at a dock within the Gaillard Cut. Our half-transit of the canal took four hours.

Panama-based Aventuras 2000 offers both a partial and full transit of the Panama Canal. Ours was included in a larger escorted package tour through Caravan Tours but can be booked separately if you’re already in Panama. Unless you explicitly request a tour with an English-speaking guide, all narration will be in Spanish. Snacks, drinks, and lunch are included in the fee, and there are discounted rates for children. Ask whether transportation to/from your Panama City hotel is included.

On the Aventuras 2000-owned ferryboat, the journey is delightfully breezy thanks to the wind off the water. You’re under cover on an open-air deck, so no need for sunscreen or a hat. However, be sure to keep hydrated! An infinite supply of bottled water and soft drinks are part of the cost of your tour.

One of the biggest advantages of the Aventuras 2000 tour is their daylight transit. The direction of transit depends on where their boat is and the direction of ship traffic that day. If you journey through the Panama Canal on a cruise ship, the trip may be after dark, as ship traffic runs Pacific to Atlantic in daylight hours, Atlantic to Pacific evenings and overnights. A full transit between oceans takes 8 to 12 hours. 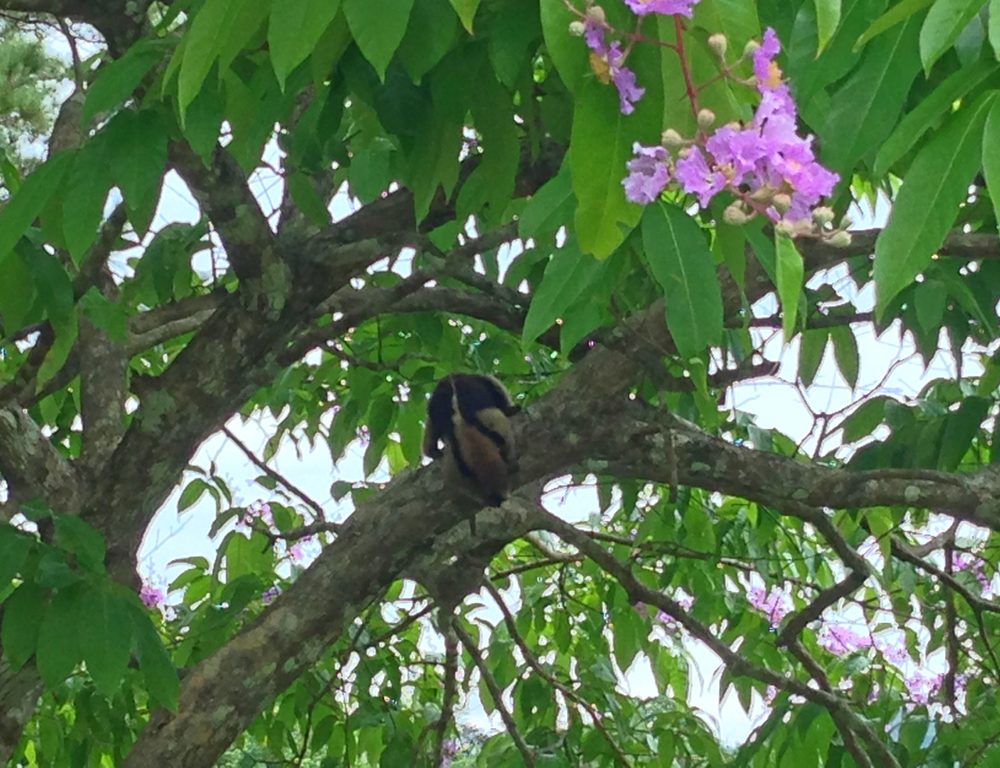 To watch the fury of a tropical rainstorm in a rainforest: there is nothing like it in the world. Sheets of rain rake a green landscape, making it greener. Bright blossoms unfurl, capturing nourishing liquid. With each massive lightning strike, tropical birds cry out. Thunder echoes throughout the river valley with a rumbling moan.

We’re in Panama on a family trip, joining John’s parents on a journey across the Panama Canal Zone. It’s a structured tour with Caravan Tours, so we don’t have much free time. Our perch at Gamboa Rainforest Resort feels like a dream, the rainforest landscape laid out across the horizon and at our feet.

A fruit bat strafed me this morning on the way to breakfast. We watched small creatures, rabbit-sized, like miniature capybara, rustle under the plants below our room.

Baby iguanas sunned on the tiles along the pool. We stood in amazement watching the strangest of creatures climb up and tear bark off trees; we found out later it was an anteater.

I’d hoped for hiking trails, but the two we found were not maintained, and when you discover an army of leafcutter ants making their own trails almost everywhere you look, well, the desire to step into a riot of tropical jungle fades a little.

We contented ourselves along the edges, enjoying the weirdness of unknown birds and the “this is like home” recognition of tropical plants like wild coffee, mahogany, Jamaican dogwood, and Guzmania.

Nearby is a national park which, were we not with a group, we’d explore. But it’s not near enough. A deeper look into Panama remains for another time. However, we did scout around a lot. The hotel provided a tour through their orchid gardens, which John, his mom, and I enjoyed.