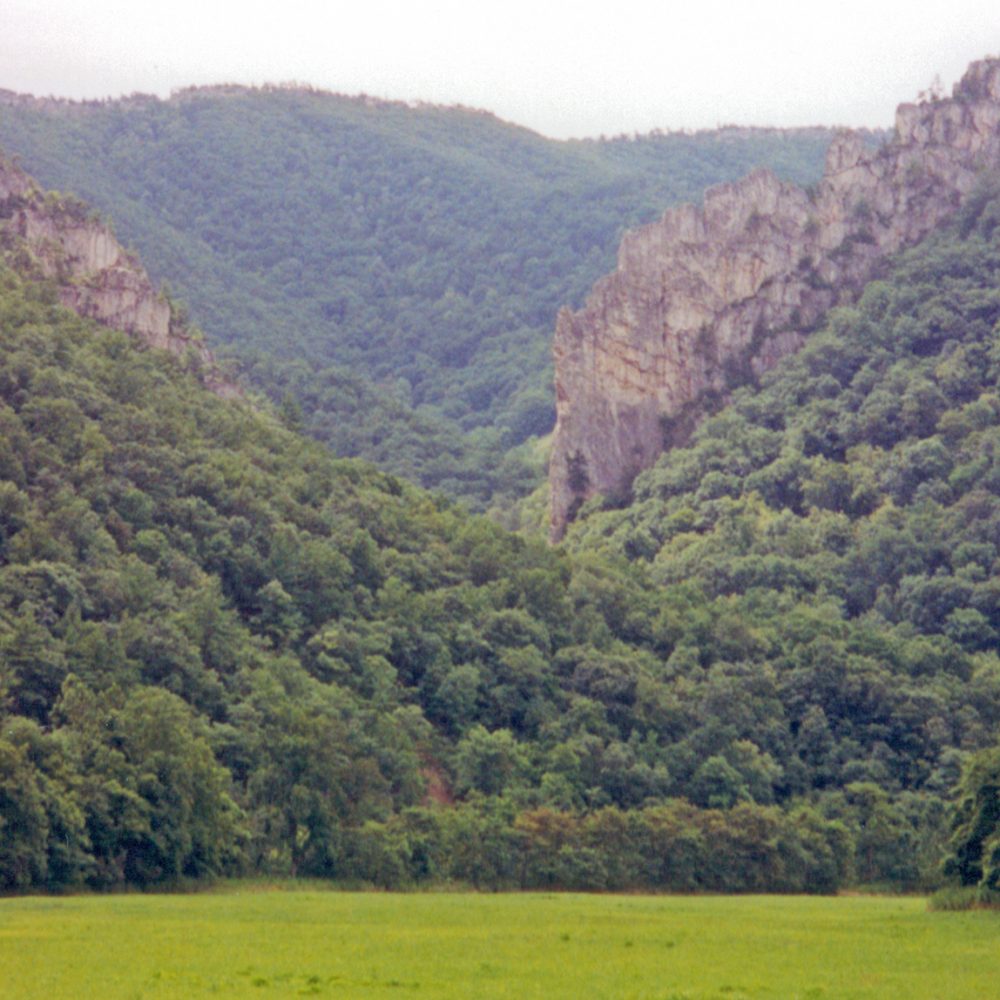 Sitting on the deck of the Front Porch Restaurant, chowing down on a slice of pizza, I had a grandstand view of the rock climbers scrambling up above me. Distinctly tilted and sparkling in the summer sun, the 900 foot tall wall of quartzite has hundreds of different rock climbing routes mapped across it. Just a few hours from Washington, D.C., this is one of the top climbing destinations on the East Coast. But you don’t have to be a climber to take on Seneca Rocks.

I love rocks, but I’m not a climber. I made my way to this mecca in West Virginia because it is so geologically unique. With a landscape of exposed crags that mimic the Apennines of Italy so well that the Tenth Mountain Division trained here before deployment overseas during World War II, it’s surreal. During the formation of the Appalachian Mountains, the folding of the earth’s crust stood a layer of quartzite nearly 250 feet thick on end, creating a series of arches. Enter erosional forces: the Potomac River takes some of the credit. Its many branches carved deep valleys through the mountains, stripping off softer limestone to expose the hard quartzite layer as jagged sharp edges pointing straight up.

I’m headed straight up, too, but not on a climbing route. It takes almost two hours to hike the 1.3 mile Seneca Rocks Hiking Trail. Rugged and vertical, it’s not the easiest of day hikes, and the steep pitches downhill can be a bit disconcerting in places. Starting at the Seneca Rocks Visitor Center, it works its way up the mountain close to the crest where climbers celebrate their ascents. A precarious side trail lets you take a closer look at the jagged pinnacles at the top, and snap photos of surprised climbers.

Back on the valley floor, it’s time to take a look at the roots of Seneca Rocks. Climbing down through a gigantic sinkhole, I enter Seneca Caverns on a guided tour. Ripple marks, frozen in stone, forever capture the ancient seas that once covered West Virginia. Descending into the earth, the big surprise is how light it is in this dark place. The sparkling quartzite above is echoed by the glisten of pure calcite formations below, twinkling like freshly fallen snow.

Discovered in 1760, Seneca Caverns first opened for tours in 1929. It contains some of the odder cave formations in the east. Flowstone drips in globby bunches like grapes, knobby cave coral, down near knee level, looks like mushrooms poking out of the wall, and huge white domes twinkle under the lights.

I squeeze into the “upside down wishing well” to make a wish, and follow the group 180 feet down a dark staircase into the Devil’s Den. As the cavern narrows down to a long, low tube, rimstone pools mirror a fairyland of soda straws. After more than a hour of stooping, squeezing, and shimmying later, we pop out of the caverns into a forest. It was a quarter mile walk back to the parking lot.

Down in the Hole

Farther up the valley is the entrance to Smoke Hole Canyon, where a crack into the mountainside leads into Smoke Hole Caverns, a show cave since 1942. Carved by an ancient stream, the long, dark entrance tube has few formations, so you begin to wonder what’s up. It’s not until you reach the fault that the fun begins. As we climb up into this huge crack in the earth, lights start to play across the formations created by calcite depositing over the ages.

Thousands of stalactites, mimicking icicles in color and size, crowd each other on the high ceiling. Delicate soda straws, draperies, and perfectly aligned rows of cream-colored stalactites decorate the chamber. Farther along the passageway, a spring bubbles out of a large volcano-shaped mound that looks like it escaped from Yellowstone National Park. Water cascades over the travertine, continiung to build up this bizarre dome. Helicitites – curvy stalactites – twirl in shades of white and peach, adding an odd accent to this long, narrow underground canyon. Dramatic flowstone creeps down the drippy walls, including one ribbon of stone weighing twenty five tons.

Climbing back out of the cave into the cool mountain air, it’s still refreshing in the middle of summer. With showy rocks below and showy rocks above, Seneca Rocks is a geology-lover’s paradise.

Seneca Rocks lies 67 miles west of I-81 at Harrisonburg, VA, but the winding course of US 33 makes it a two hour drive. It’s not an easy drive to get here. You’ll follow a jigsaw puzzle of roads that clamber up the sides of mountains and veer through hairpin curves. Bring a highway map: you can expect your cell service to vanish in the deep valleys. Both Seneca Rocks and Smoke Hole Canyon are part of the Monogahalea National Forest, protecting nearly a million acres within West Virginia’s highest mountains. The forest encompasses nine designated wilderness areas and offers outdoor recreation enthusiasts a variety of rugged experiences.

In addition to its standard cave tours, Seneca Caverns offers “an introduction to wild caving,” perfect for teens, with its Stratosphere Cave tour for groups.

Family owned and operated, Smoke Hole Caverns is surrounded by Smoke Hole Resort, a large complex with upscale cabins, a small lodge, a campground, and rustic cottages, a great base camp for outdoor recreation in the area.