Who expected to go foraging for berries in the Keweenaw? Not us! But a thimbleberry margarita led to woodland wanders looking for this tasty fruit.

You are here: Home / Travel / Time for Thimbleberries

We had just checked in at the Laurium Manor Inn and asked for dinner suggestions. Managing the front desk, Michelle told us about a place in Eagle Harbor and then mentioned Carmelitas Southwestern Grill in downtown Calumet. “They have great thimbleberry margaritas!” she said.

On a previous visit to the UP, I was introduced to winterberries during a guided walk with a ranger at Pictured Rocks National Lakeshore. They tasted like chewing gum.

In Germany, I had cloudberries. Now, those were magical, more tart than sweet, growing in coastal birch forests near the Baltic Sea.

In Oregon, we discovered huckleberries were the big thing and were found everywhere. I found a huckleberry-flavored coffee that was surprisingly good.

But it wasn’t until last summer I learned about thimbleberries. I was hiking a piece of the Superior Hiking Trail north of Duluth and saw a ground cover that seemed to be a berry. I took a photo and asked the next ranger I met. Yes, it was thimbleberry!

Thimbleberry likes birch forests, which is something the Upper Peninsula of Michigan has plenty of. It also seems to need a certain modulation of humidity, as provided by Lake Superior. So where better to find them than on the peninsula of a peninsula, the Keweenaw?

After that tasty margarita, I was determined to look for thimbleberry in the wild. I didn’t know for sure, but I guessed from my trip last summer there would be patches in the woods within a few miles of Lake Superior. And this is thimbleberry season, on the heels of Michigan’s blueberry season.

We ran into Julie Sprenger, the owner of Laurium Manor Inn, as we headed out after breakfast. She suggested a preserve and hike I’d never heard of – Grinnell – so I plugged it into Google Maps. And here’s where to follow Kath Usitalo’s advice about the UP. “Don’t trust Google Maps!”

We saw the landmarks Julie had mentioned – Lac La Belle, Bete Grise – but where Google wanted us to start uphill on a narrow gravel road, we quickly encountered a sign. “Private Road.” It took an eight or twelve point turn to get out of that sticky spot. But all around us, I saw thimbleberries!

We turned back on the paved road and continued down to Bete Grise, a broad, secluded bay on the underside of the tip of the Keweenaw Peninsula. It led us past a sandy beach and ended at a small preserve on a harbor that the Corps of Engineers had created for boaters to get out of the bay and into Lac La Belle.

True to form, a lighthouse stood sentinel – on the opposite shore of course – to guide boaters into this narrow channel. After surveying this small park, we returned to the beach to enjoy the view. I poked around the woods near the restroom but no thimbleberry there.

As we were driving up the road away from the bay, I spotted them. Thimbleberries! On both sides of the road.

John found a safe place to pull off and we both went foraging. From paths beaten down into the ditches, we weren’t the first.

It didn’t take long to pick handfuls. What better to do than snack? Near the end of their season, they dribbled juice stains like wild blueberries but tasted like raspberries without being as seedy. John thought they were sweeter, but I found them tart.

As we drove out of Bete Grise, I noticed that we saw no more past a certain elevation or distance from the lake. But in the deep dark woods that enveloped the last 10 miles of US 41, we kept spotting the now-familiar plants. There are few safe places to stop in this stretch, however.

No worries, as we’d keep spotting them. Driving into Mary MacDonald Preserve and the adjacent state forest beyond the end of US 41, we saw them once we parked the car and rode further to the tip of the Keweenaw on our mountain bikes.

Right between the parking lot and camp store at Fort Wilkins, there they were again! These were heavily picked over, of course.

We can only assume that thimbleberries were a welcome addition to Army rations for the soldiers stationed here in the 1800s.

Driving up to Estivant Pines, we discovered thimbleberries along the roads, and right around the parking lot. 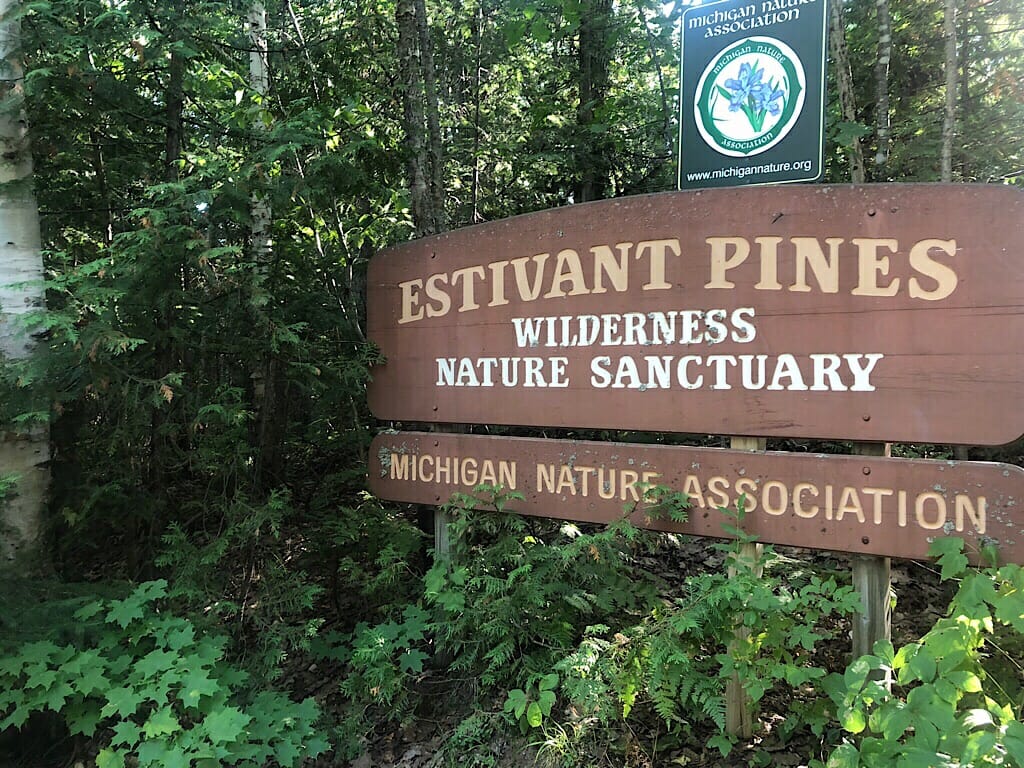 In this preserve of virgin white pines, the thimbleberries thinned out the deeper we walked into the pine forest. But the habitat change was obvious, too.

Of course, you can pop into shops from Calumet to Copper Harbor and find thimbleberry jam, especially at the Jampot in Eagle Harbor. But for thimbleberries fresh from the forest, show up in the Keweenaw in July and August and prepare to do some foraging!

Mountain Biking Marquette
Next Post: Chasing Rockets in the Keweenaw