Tip of the Keweenaw

You are here: Home / Trails / Tip of the Keweenaw

With the bikes loaded up, we took off downthe very bad road to High Rock Bay. After about a half mile Sandy was feeling like the road was going to be too technical for her, and she turned back. Believing I could make it, I continued on.

It was a difficult three miles or more before I could see open sky ahead. It felt so good knowing that I was getting close to the end of the Keweenaw Peninsula.

As I crested the hill, the view was spectacular: water and rocky shores as far as I could see. This had to be one of the most remote and beautiful places that I have ever ridden to.

Hoping to find the memorial to the early space program, and without a map, I tried a “road” that I had passed earlier.

No luck. It led me to another clearing along the shore. One that I had seen from my first stop atop the hill.

Just as I was about to give up, I looked closer at the only trail sign there, “The Point Trail.” The sign showed that hiking and biking were allowed. It was worth a try, since l’d made it this far. I said “why not?”

The Point Trail was a fun narrow, twisting path which quickly turned tougher the farther I went. After I made it over a few of the larger rock climbs, my common sense told me that it was safer to stop and push the bike. Without cell service there was no way to call for help.

Just pushing the bike was becoming difficult. When the ground wasn’t large rocks, it was small very worn stones. The sand had vanished long ago. It felt like I was walking on marbles.

Leaning the bike against a tree, taking both cameras and the GPS, I started walking. Coming to another beautiful rock overlook, I noticed fire rings.

I spotted a what looked like a low marble headstone in an opening. Hoping that I had found the hidden rocket launch site, I quickly made my way in its direction.

Once I was nearly there, I could see what looked like the arc of a metal track. It was similar to but noticeably smaller than the tracks that I knew from my days at Kennedy Space Center. I knew that I had found it. 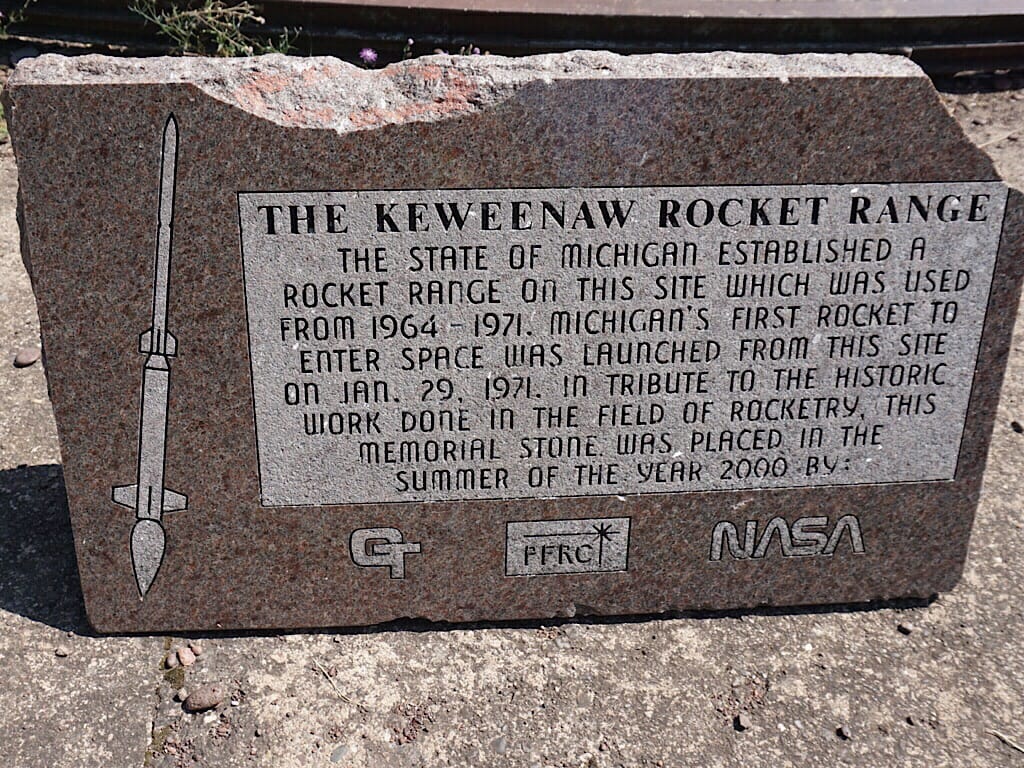 It wasn’t an easy task to find it, but I was standing on the site where rockets were launched under the direction of NASA between 1964 and 1971. 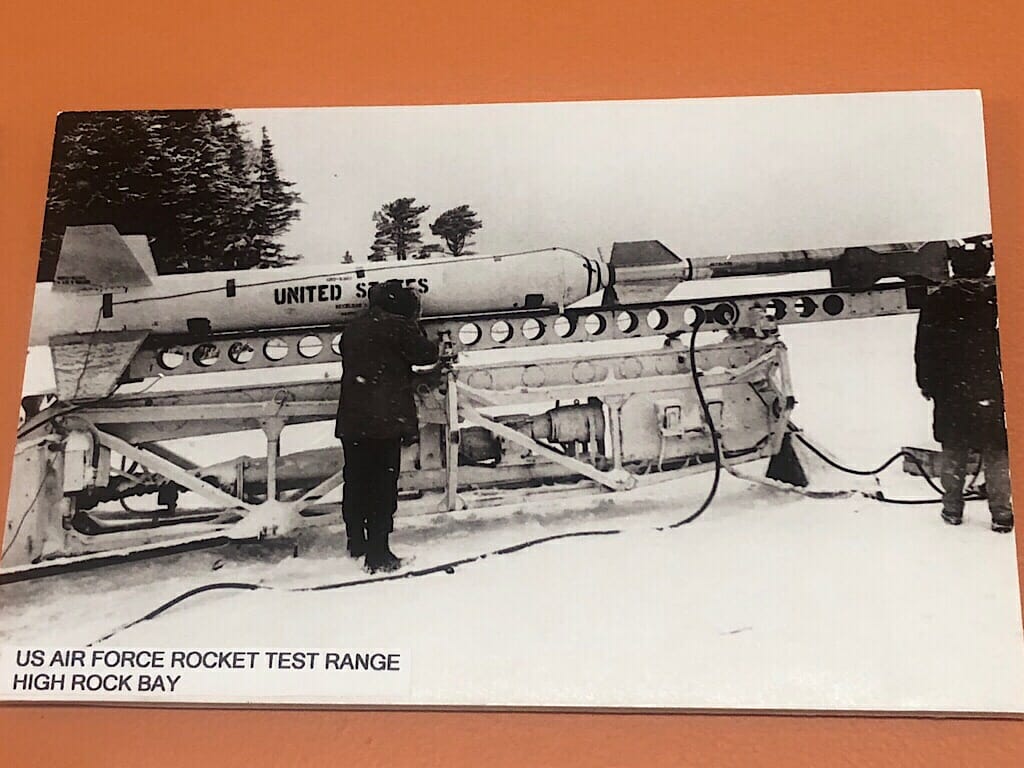 When we stopped at the Copper Harbor Visitor Center later in the day, we saw this photo of an Arcas rocket being prepared for launch in 1964, on a launcher brought from White Sands. A little digging revealed that this launch site was originally set up by the University of Michigan to launch rockets to collect meteorological data. Because of shipping traffic, they restricted launches to the winter months.

By 1971, they were launching much larger rockets: two Nike Apaches, under the direction of Goddard Space Flight Center. Although they’d hoped to launch Redstone rockets, the launch site was never used again after 1971.

It was a long ride back, but the satisfaction of finding the memorial kept me going. In several places, the road was too steep and rocky for me to ride, so there was a good hundred yards of pushing the bike uphill.

Along the way, traffic had picked up going the other way, with a handful of vehicles and a couple of other riders. When I was less than a half mile from the trailhead, a large four-wheel drive stopped, and their power window lowered.

“Are you coming back from the point?” he asked.

Upon hearing that I had, the driver said “I’ve got a lot of respect for you.”

I thanked him and said that the only thing crazier than me riding out and back, was that I was from Florida, and still managed to do the ride.

Chasing Rockets in the Keweenaw
Next Post: A Day in Paradise