Chasing Rockets in the Keweenaw

When we got wind of a rocket launch site at the tip of the Keweenaw Peninsula, it was time for another off-road adventure.

You are here: Home / Trails / Chasing Rockets in the Keweenaw

In retrospect, our trip was a risky idea, made under the mistaken assumption that the tip of the Keweenaw Peninsula was not as hilly and rocky as it actually is.

US 41 ends at a loop in Copper Harbor just past the last turnout into Fort Wilkins. Google Maps seemed to think we could keep going, at least up to Mary MacDonald Preserve and Horseshoe Cove. The road was unpaved but broad and graveled. So we continued.

The turnoff for Horseshoe Cove was narrow, sandy, and steep. The main road looked better. We pressed on. As I finally had a brief moment of cell service and locked on to our planned destination, the tip of the Keweenaw Peninsula, the distance to it suddenly doubled.

My thoughts of “biking down the road to see it” started to falter. Especially as the road narrowed and made sharp turns. It was a flashback to Flagg Mountain. I wasn’t comfortable here.

John had caught the bug, however, probably when I mentioned “this would be cool to show your dad.” We’d only learned about the Keweenaw Rocket Range a day or two before.

Lori, who took John out on the NTN in Marquette, mentioned a granite monument at the end of the peninsula that had to do with space history. Someone else told us you could drive to the Brockaway Mountain Overlook and see the launch pad.

It was an early rocket project, contemporary with John’s dad working on rockets in Florida. The launch site opened in 1964, backed by the state of Michigan, to test rockets. It’s claimed that a rocket launch reached space in 1971, and came back down in Lake Superior. The site closed soon after.

We found a large parking area along the main road just before the turnoff and figured that was the smart spot to park and bike from, a 6.4-mile round-trip as Google Maps claimed.

The main road was fine, if not a little downhill. When we turned onto High Rock Bay Road, the screen flashed up “Rocket Launch Trail.” I should have paid more careful attention to the signage at the turn, or at least the sticker someone put there.

It went downhill fast, in all senses of the word. Dusty was fine, but the grade was steep enough all I did was ride the brakes. There was no way we could have gotten our CR-V down it. Sloped and studded in rocks, it was way over my head in terms of biking ability.

So after a half mile, I bowed out. Despite the thickets of thimbleberry on both sides of the road, I wasn’t too worried about meeting a bear, or a moose. 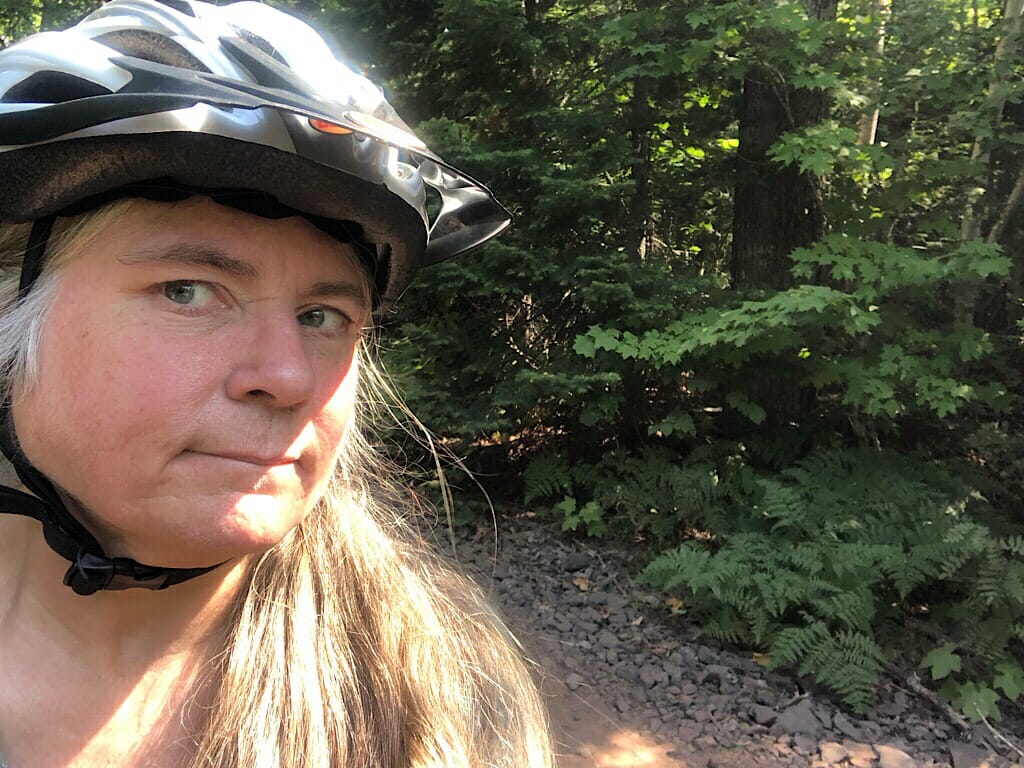 John’s an excellent cyclist, and he’d just had a much gnarlier experience on the easy part of the NTN the other day. So I wasn’t too worried about him getting there and back.

It did trouble me that the phone firmly stayed in “No Service” mode while I waited, so there was no way for him to contact me. But he’d been cycling well before cell phones existed, so I trusted he could get out of a jam.

I was surprised at the amount of traffic on this forest road on a weekday, mostly pickups, Jeeps, and SUVs. Both in-state and out-of-state visitors, all seeking the tip of the Keweenaw Peninsula. How many could actually make it down that side road to High Rock Bay? John was about to find out.

Time for Thimbleberries
Next Post: Tip of the Keweenaw