Paddling along Lake Michigan at Petoskey was a bit intimidating for a Floridian who is used to sandy, not rocky, shores. But the views and clear water made for a fascinating trip.

The emerald waters of Lake Michigan surprised me with how clear they were as we reached the coastline near Charlevoix, and again while biking the Little Traverse Wheelway. So I was looking forward to seeing them up close while in Petoskey. 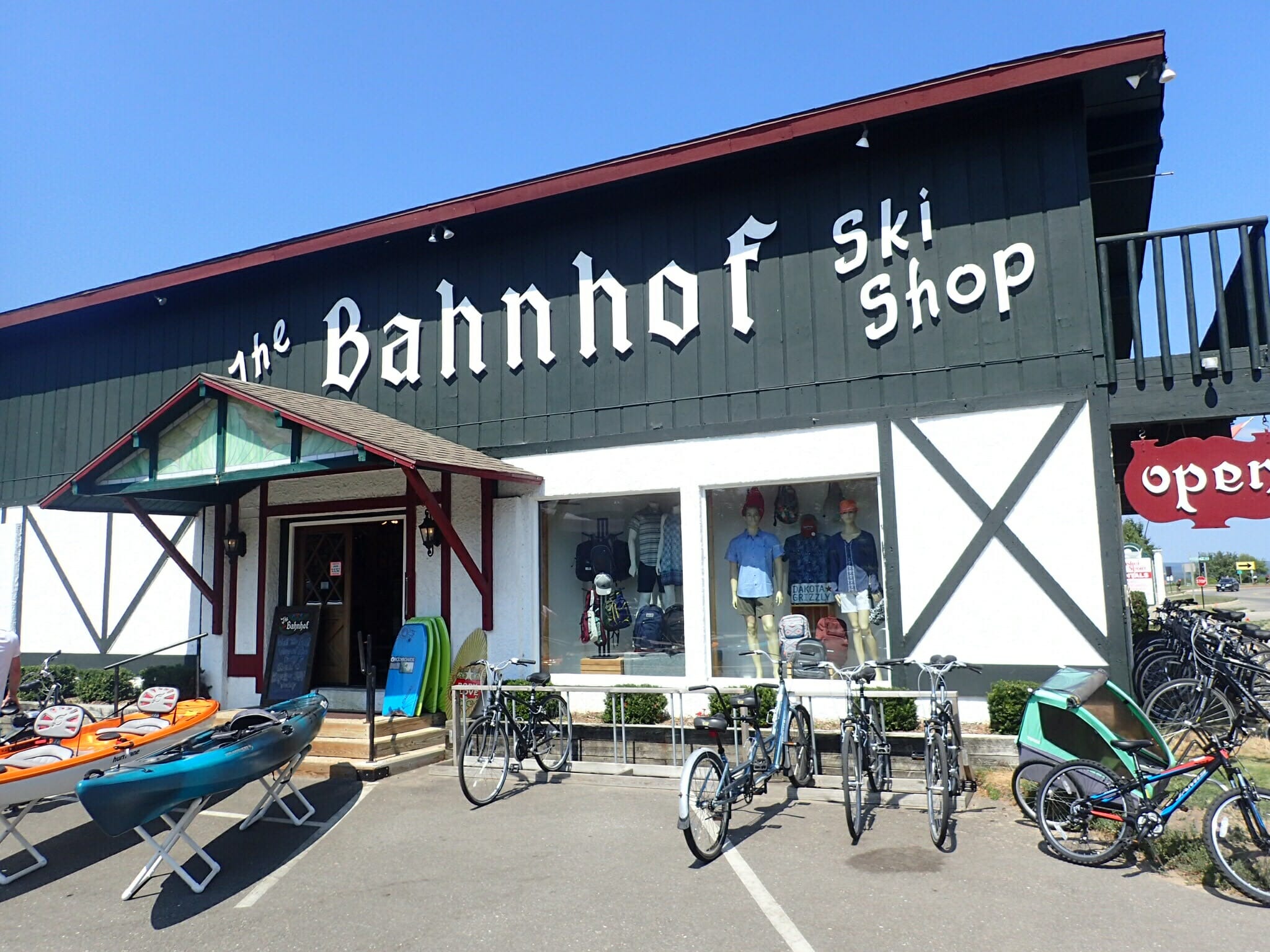 As we rode past Bahnhof Sport in the morning, we saw Don Marszalec, the owner, and Gary getting rental bikes out along the bike path, which goes right past their store. I came back after lunch to start my paddling trip. 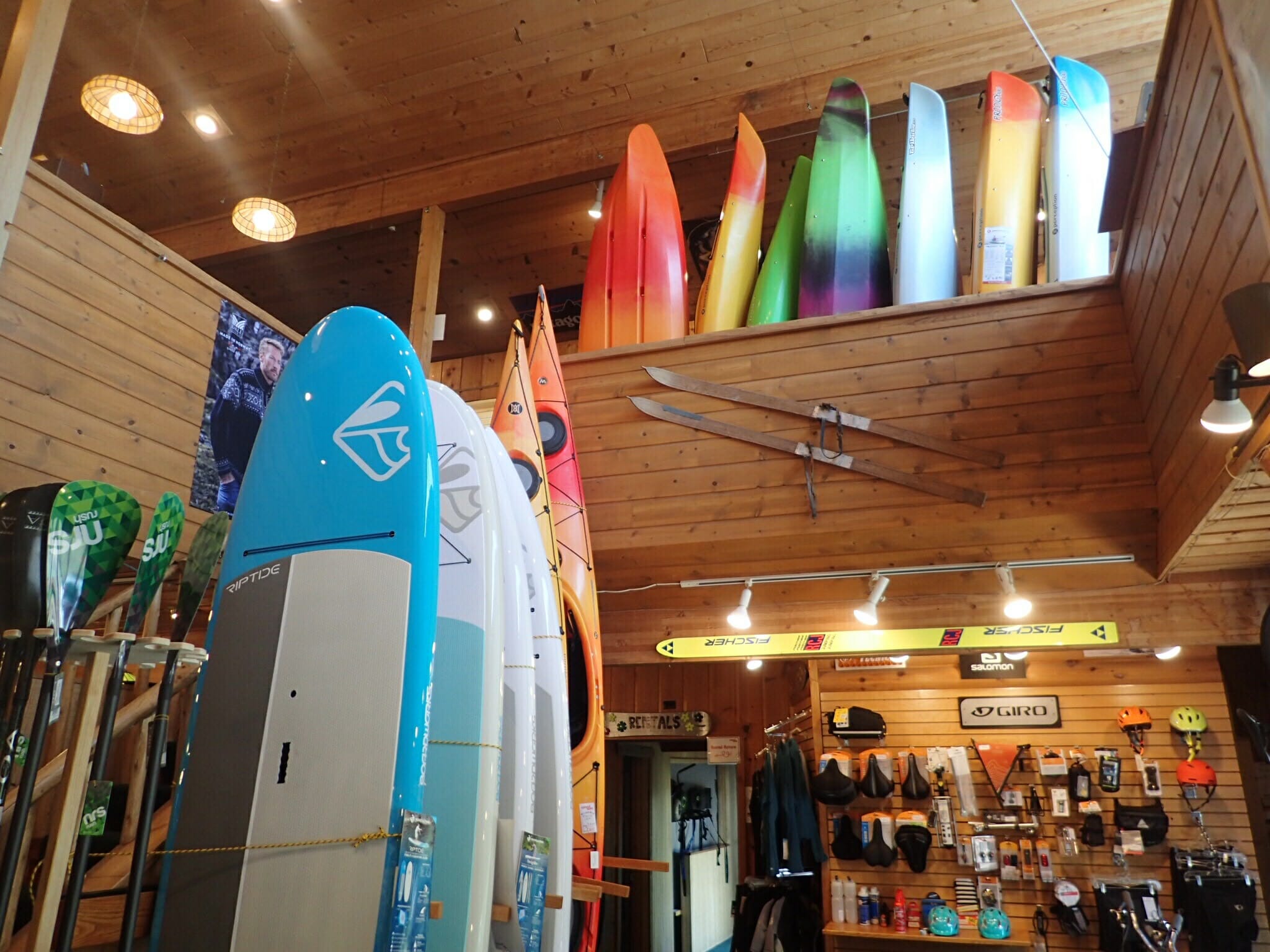 The store opened in 1963 and has not just bikes and kayaks, but ski equipment, snowboard clothing, and more for the outdoors. They were even able to find a strap for my bicycle cage, which I’d broken earlier in the day.

After talking to Don, who recently acquired the store from the Smith family, and Missy, who’s been working there since 2001, I signed the waiver. Missy and I pulled our kayaks a block to the water’s edge, a rocky beach no wider than a narrow road. 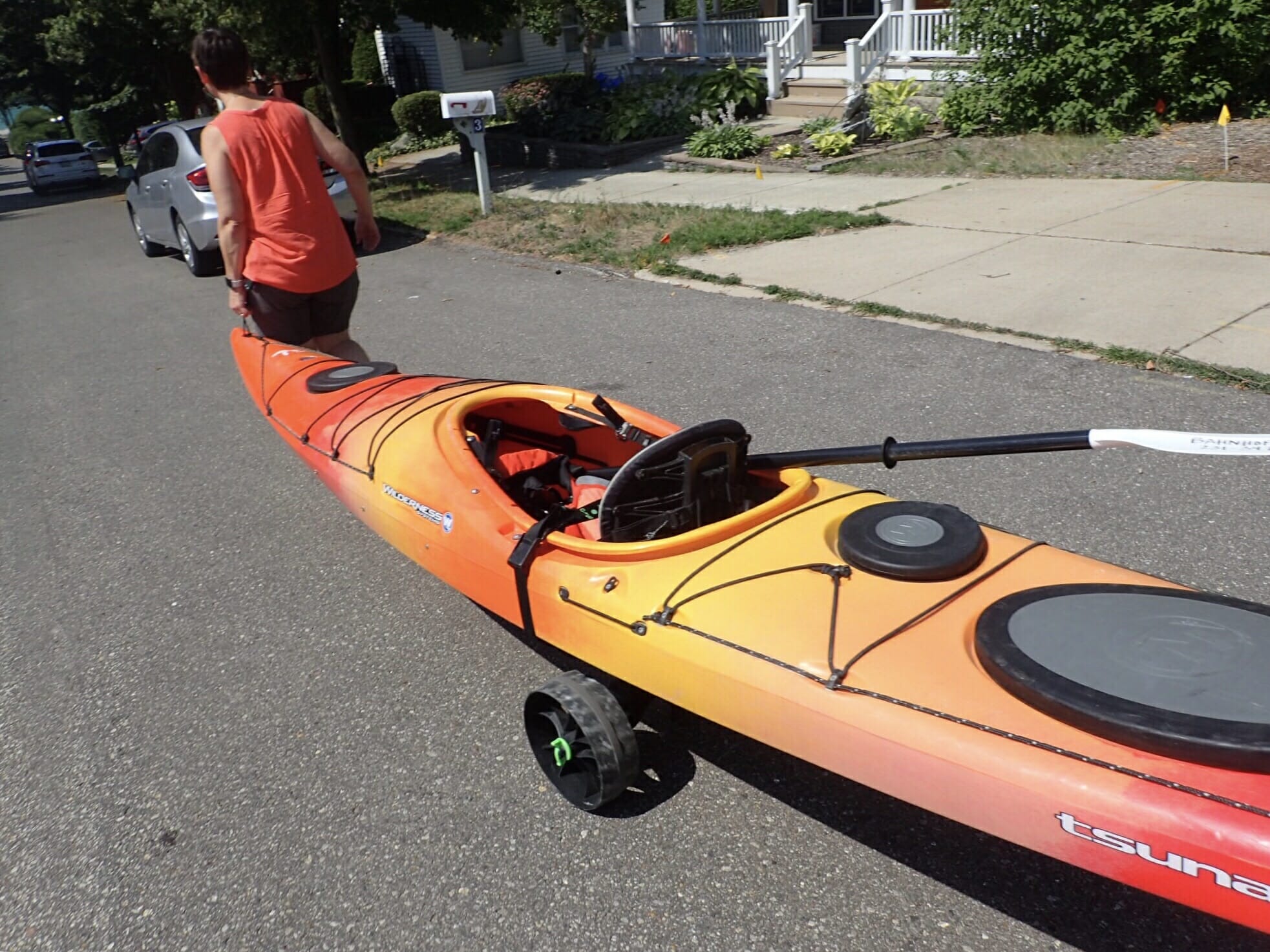 The lake was very rough. Missy said if I hadn’t been an experienced kayaker, we wouldn’t have gone out. Even rough, the water is still a beautiful emerald blue. 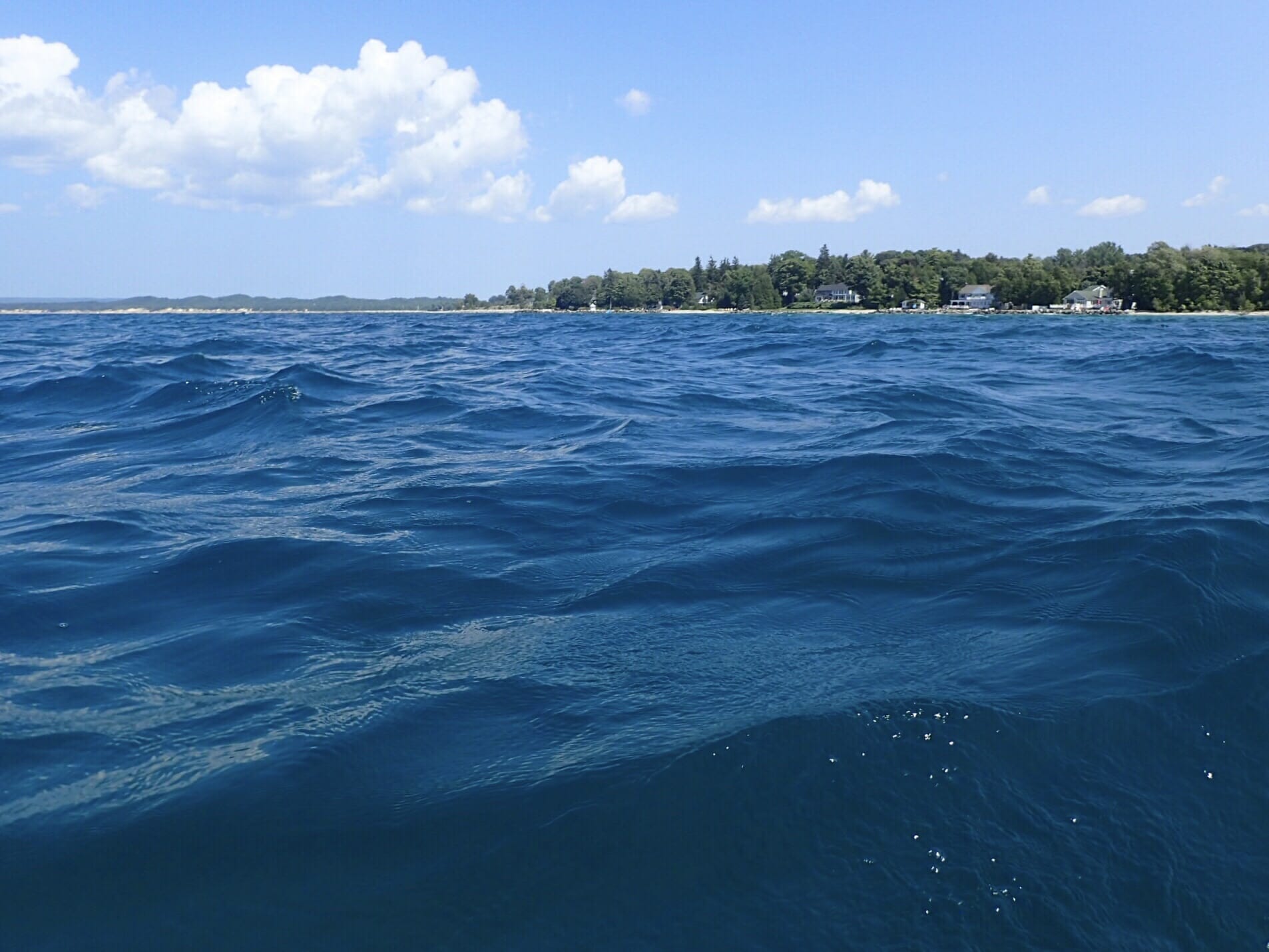 She launched first, and was struggling to stay close in case I needed assistance. I got lucky. The waves were pounding and the kayak was bouncing all over the place. Between swells, I quickly stepped over and sat down as the boat was rising up to meet me. Without hesitation I paddled into the oncoming waves. 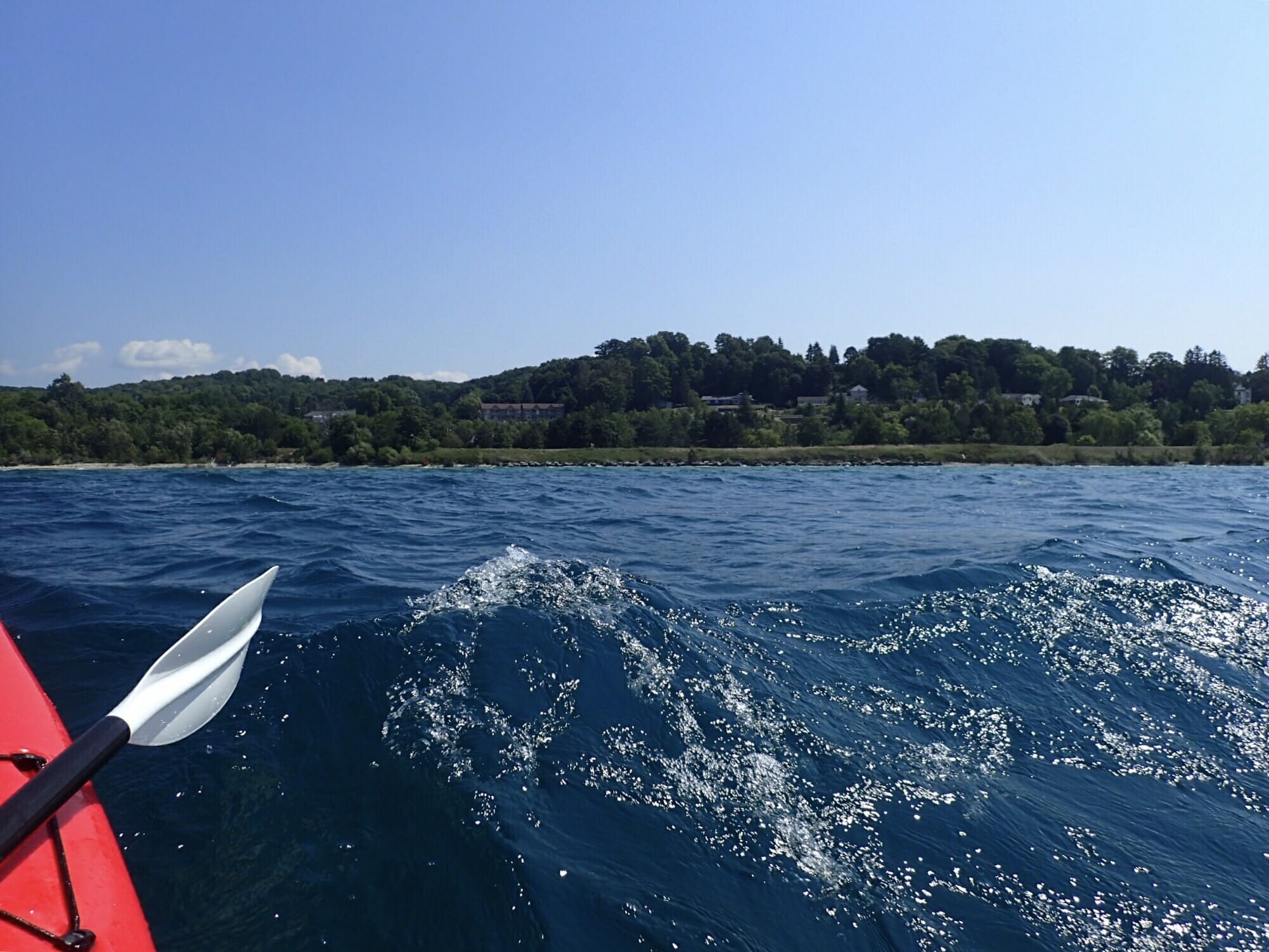 Missy was in a sea kayak, I was in a large opening recreational one. My bow poked into the oncoming waves and the water came right over the top and into my boat. I was drenched on every wave. 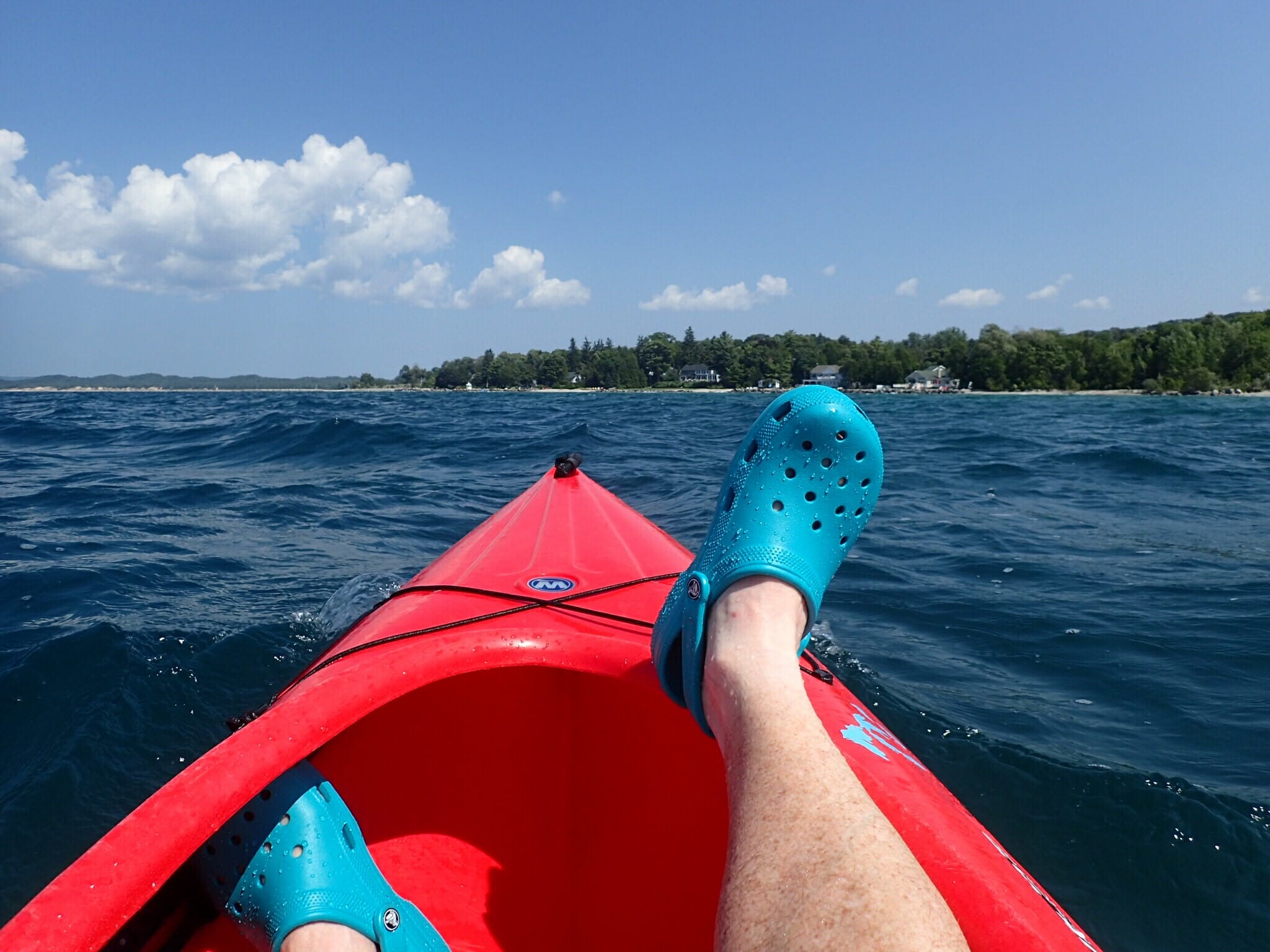 The lake water wasn’t as cold as I expected. Even this rough, it was still so clear that could still make out make out shapes and colors on the bottom.

When Missy asked how I was doing, I said that I was very intimidated being in Lake Michigan. She couldn’t believe it! Sure, I have kayaked and sailed in the Atlantic Ocean, I told her. If I fell into the water there, I knew that all I had to do was swim to the sandy beach and walk out of the water. Here, all I could see were waves crashing against large rocks on boulders. Surviving that terrified me. 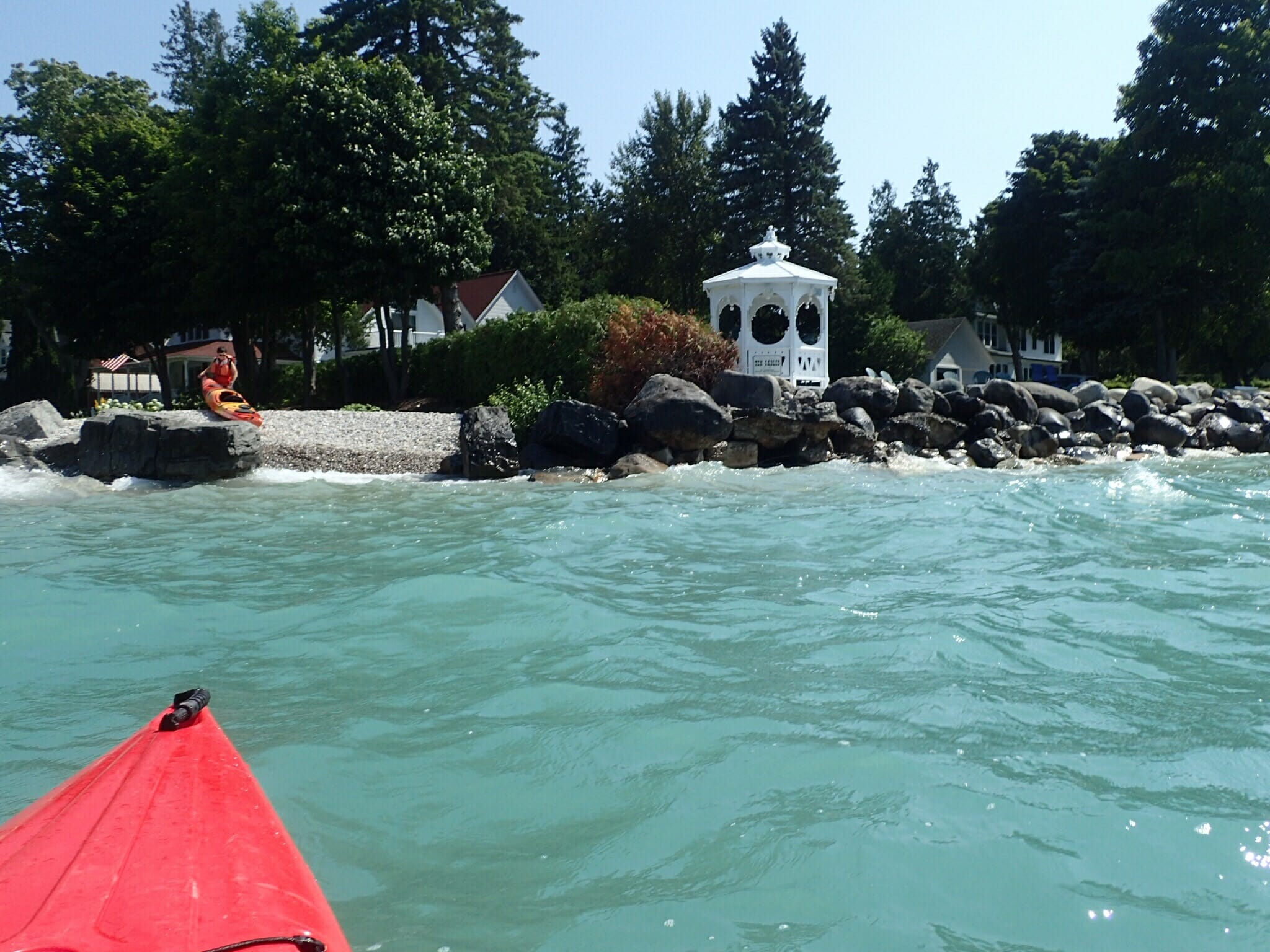 There’s an old saying “any day on the water is a good day.” It might not be the same up here in the Great Lakes. I know that they can get pretty nasty. But today, with Missy as my guide, I survived my first experience in Mishigami, “where the water is salt and shark free.”