Along the Muskegon River in Michigan, Big Rapids Riverwalk stretches several miles through the heart of Big Rapids, with scenic views of – you guessed it – river rapids from this linear park that links with the White Pine Trail.

You are here: Home / Trails / Riding the Big Rapids Riverwalk

When we pulled into Big Rapids to spend the night on our drive north, I wondered at the name. Could there be some interesting rapids we could visit? Zooming in on Google Maps, I saw several riverfront parks near downtown. Zooming in closer, I found a line between them: the Big Rapids Riverwalk. Our morning plans were set. 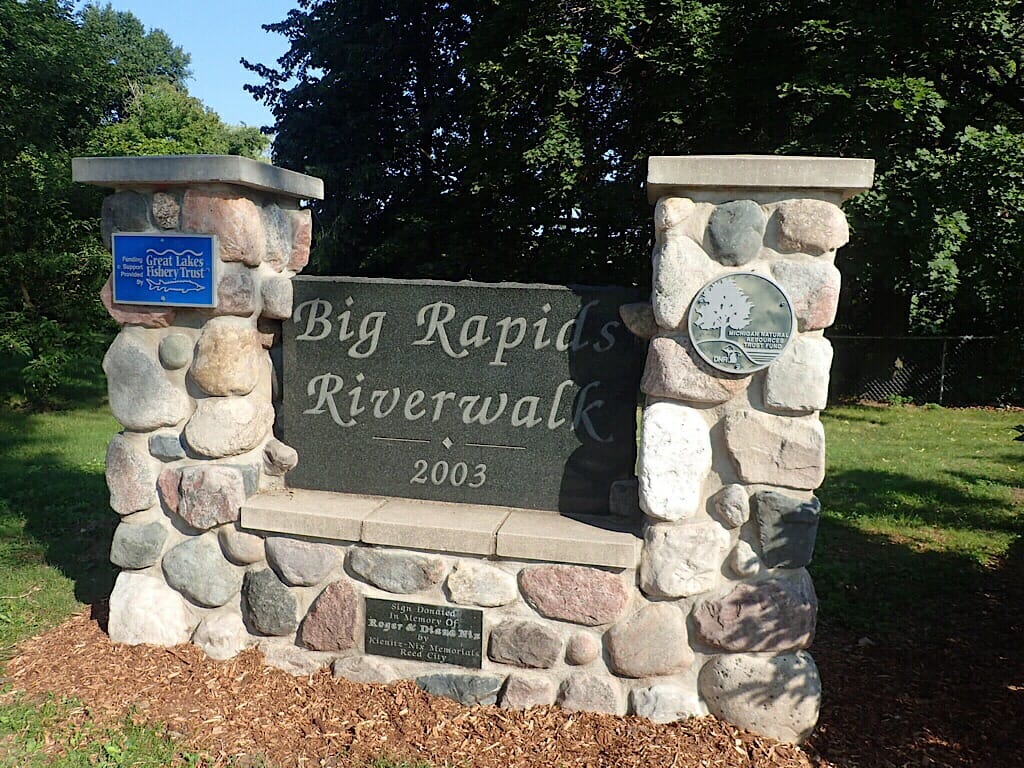 After fueling up on coffee and eggs at Crankers, a downtown brewpub that dishes up breakfast, we went in search of a trailhead. Since the entrance to Hemlock Park was blocked by heavy machinery, we found our way to the south end of the Riverwalk, adjoining a dog park at River Street Park. 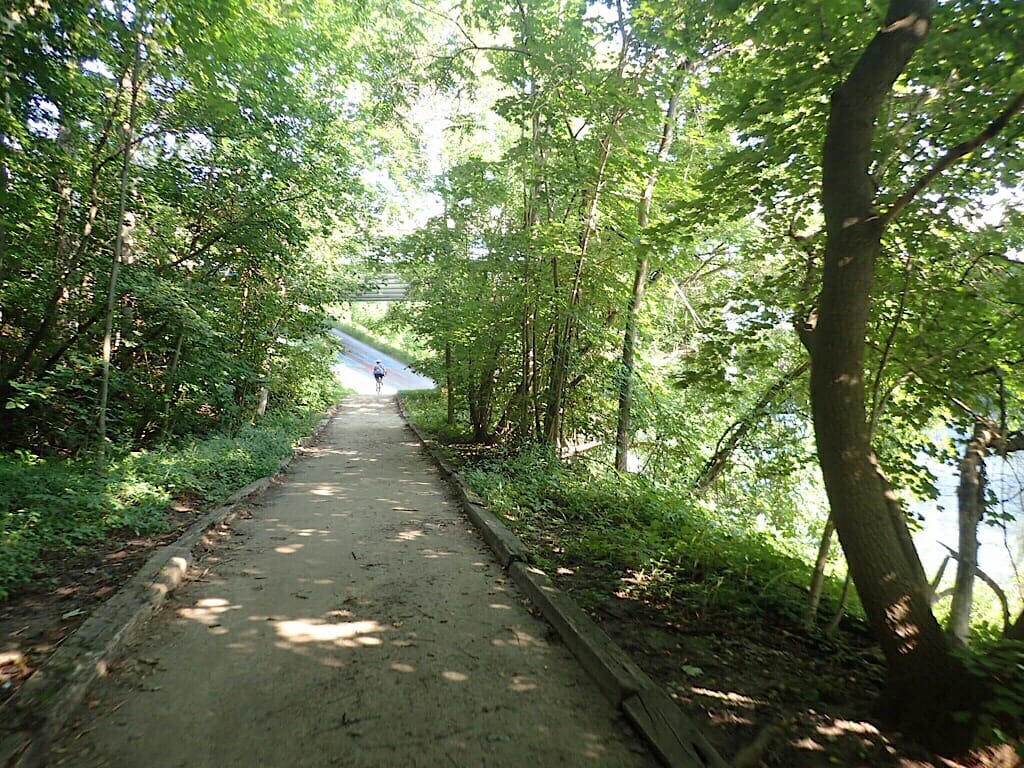 We quickly learned why a dashed line connected River Street Park to Hemlock Park as pavement gave way to a wide dirt path under a swath of tall deciduous forest. Not a problem on mountain bikes! Passing under a highway bridge, the trail became paved and opened up into the grassy waterfront expanse of Hickory Park. Two boardwalks led to views of riffling rapids. 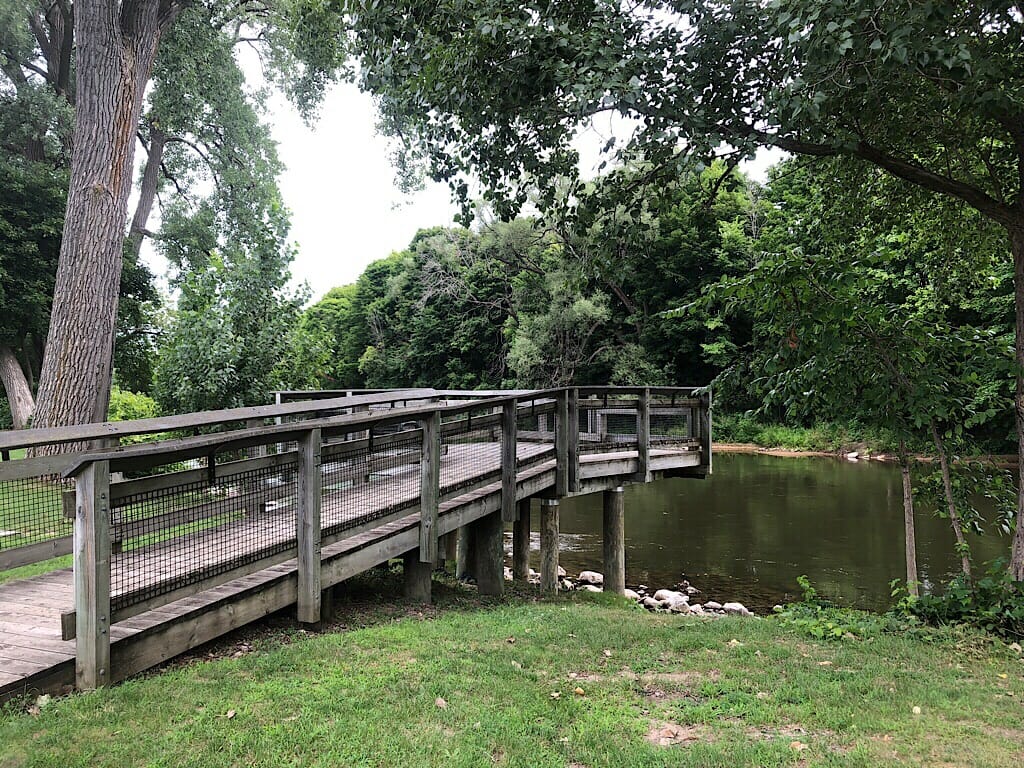 Passing the “official” dedication marker and start of the Big Rapids Riverwalk, we crossed a short bridge and skirted around a school to a longer bridge, this one across the Muskegon River itself. Beneath it were some Class II rapids and an island that the bridge hovered over. 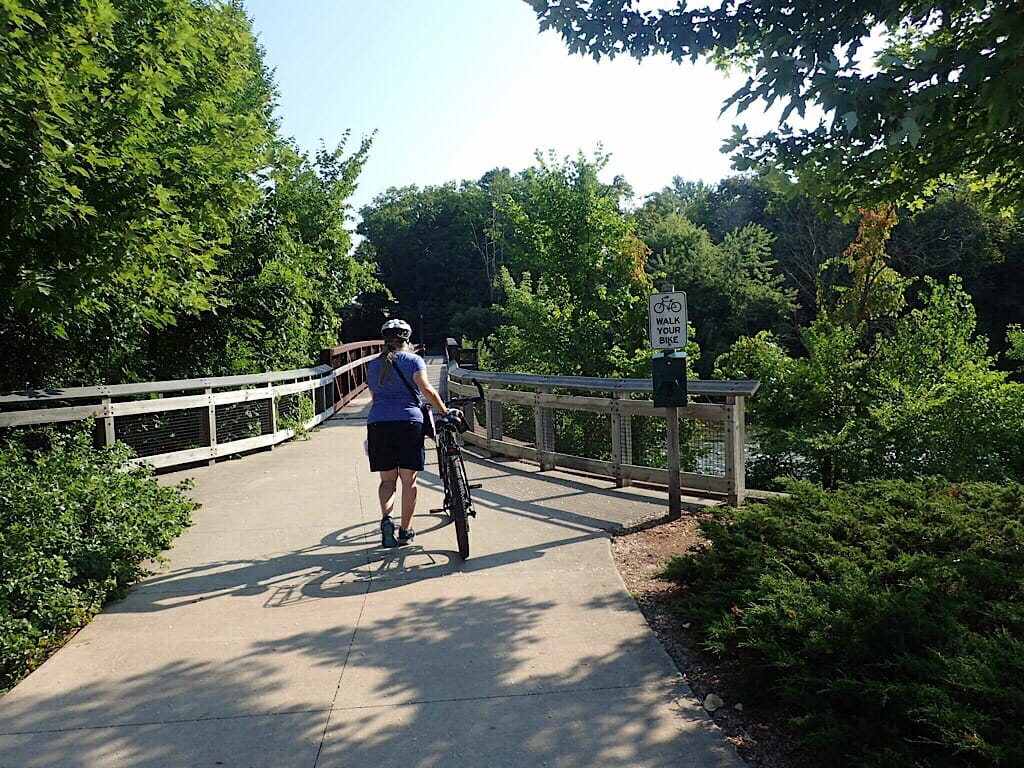 As it made a sharp turn and went uphill, I slowed down as I saw something skitter around on the asphalt like a lizard. Lizards don’t live this far north, so I figured it was a bird. Then I saw the tail. Chipmunk! It moved as quickly as I did, so no photo. We don’t have them at home, so it’s delightful to see them. 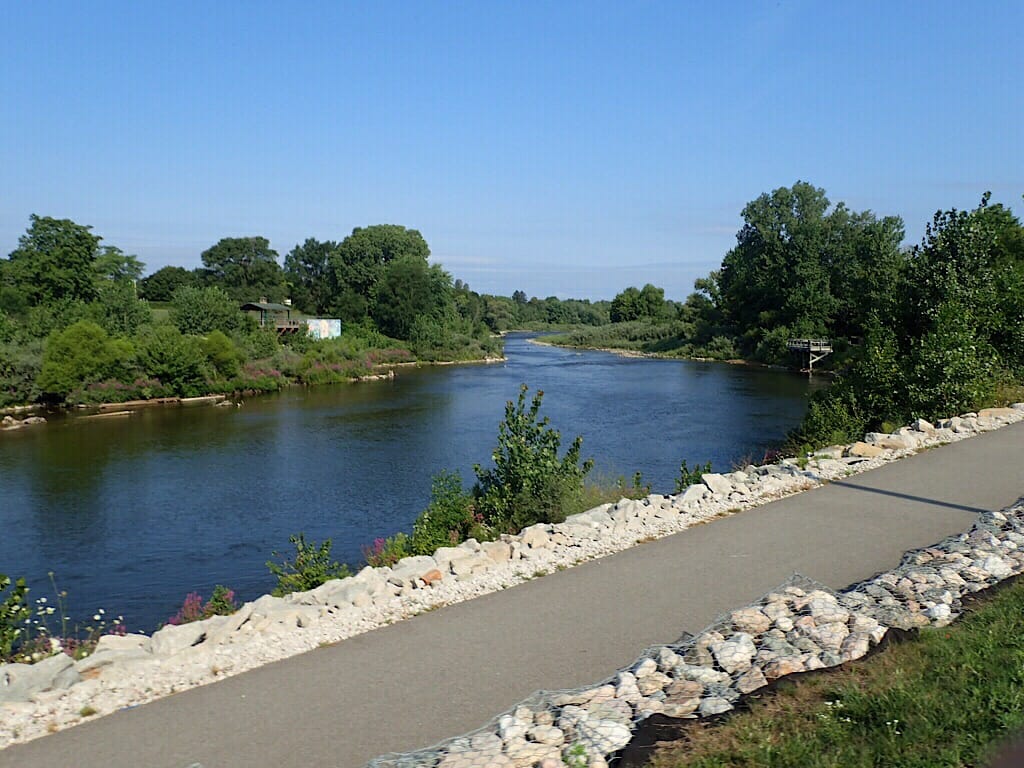 An outfitter with stacks of canoes and kayaks was at the base of the bluff where we came to our first actual road crossing and had to scout where the trail went next. It jogged left to enter Swede Hill Park, resuming its riverfront views. 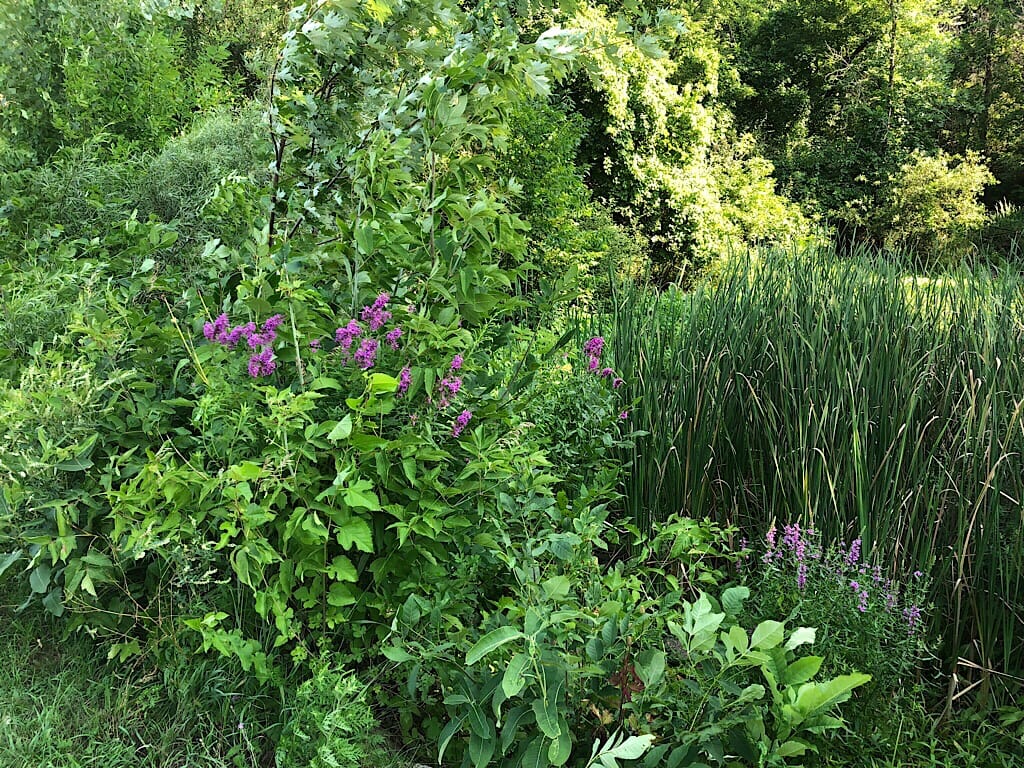 A swale cradled a swamp, and I could see a boardwalk on the river side. I hopped off the bike and went to look, seeing more rapids in the river. John met a fellow wearing a Marco Island t-shirt and that sparked a conversation. 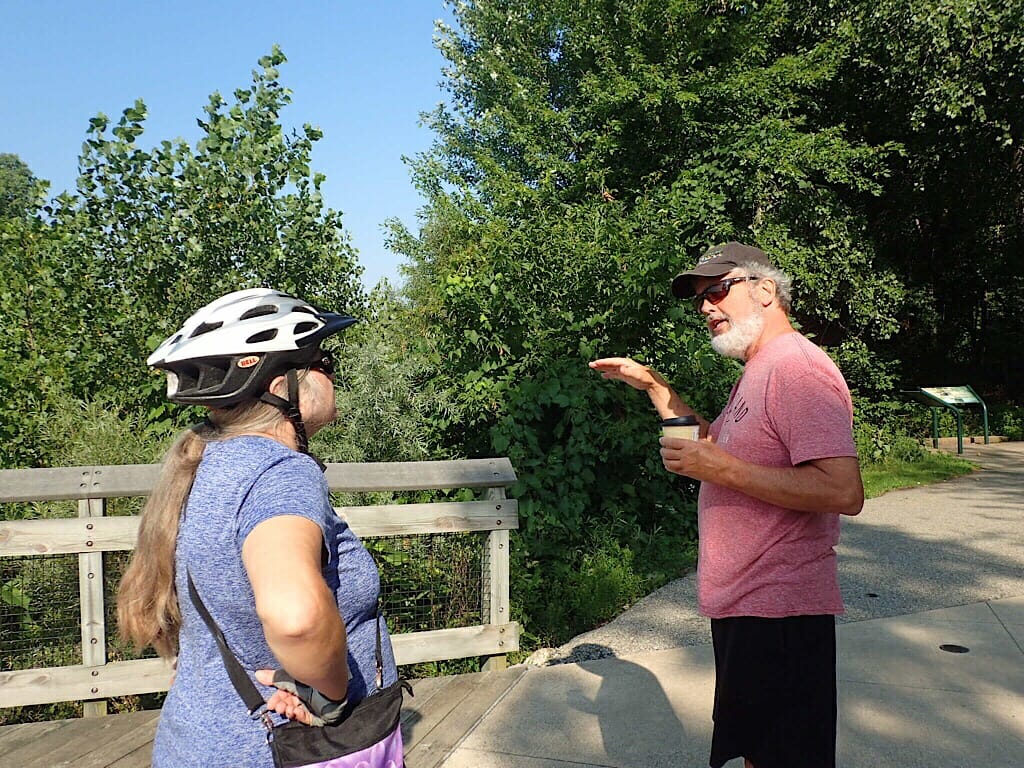 Seems he was a local who spent winters in Florida. He pointed out some former pieces of a dam that had been removed from this spot. He suggested we stop upriver to see the bigger rapids. In all, the Muskegon River drops 18 feet through the city, making for many series of rapids along this trail. 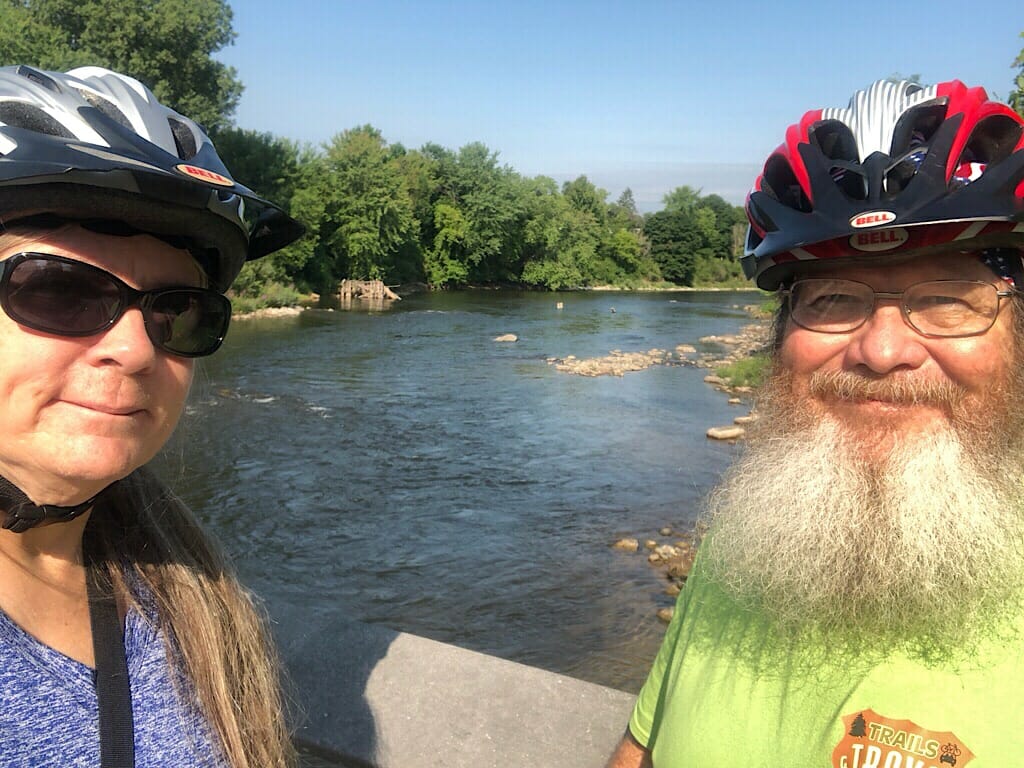 After a traverse of a grassy area where a mill used to be, the trail entered the woods and looped through another park, Northend Riverside Park. Here, people were enjoying the picnic area and playground, walking their dogs along the path. 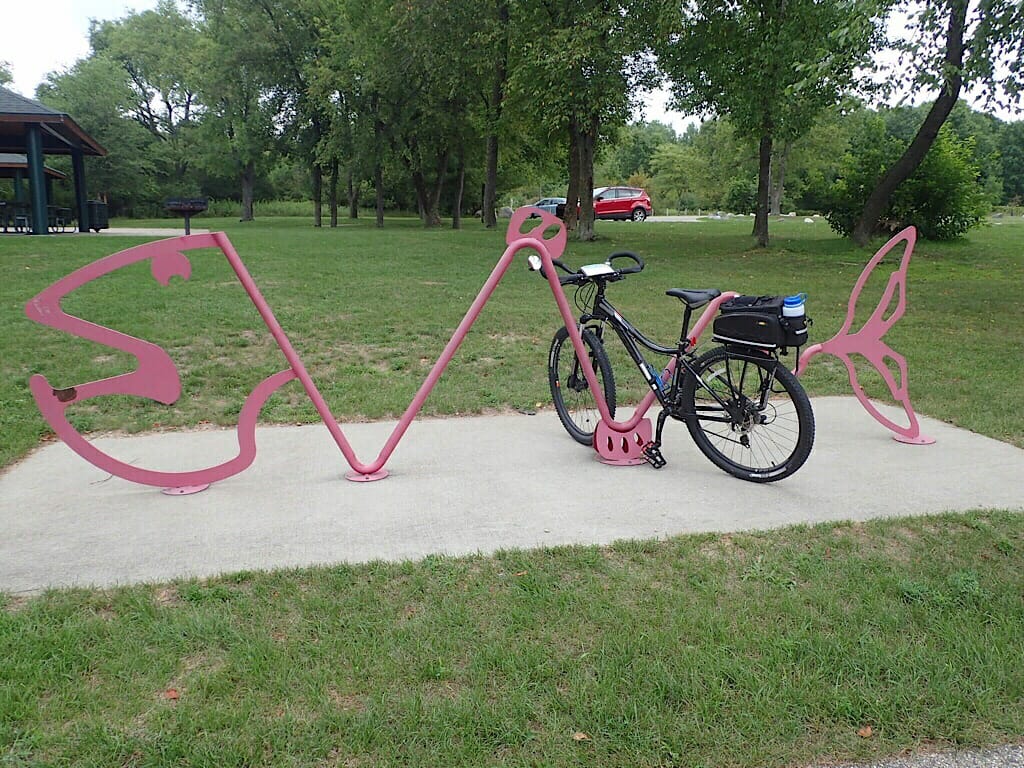 Heading back into the lush deciduous forest, the asphalt ribbon led us past a sign we had to chuckle at before it crossed a minor road and ended at the intersection of a frisbee golf course and a major bike trail, the White Pine Trail. Since we had another ride planned today, we only went a short ways along the White Pine Trail, far enough to notice the bounty of blackberries and poison ivy along its edges. 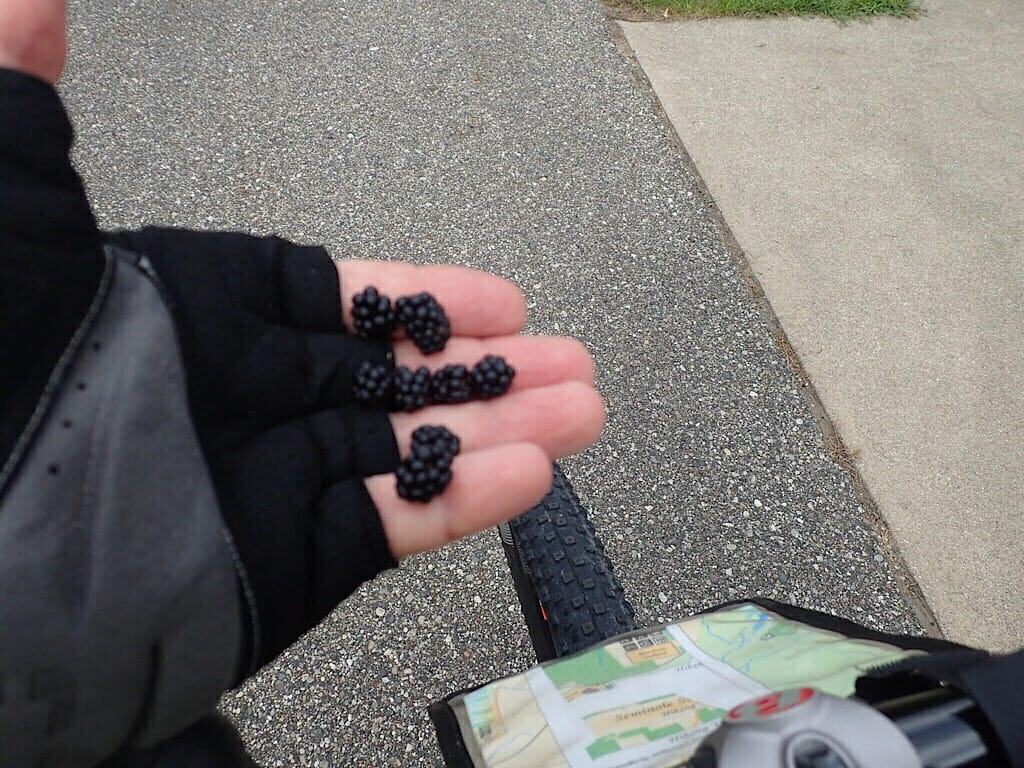 John rode out on a bridge while I parked my bike and climbed down a series of steps. I carefully tiptoed between poison ivy and poison oak to reach a gravel bar along the creek. 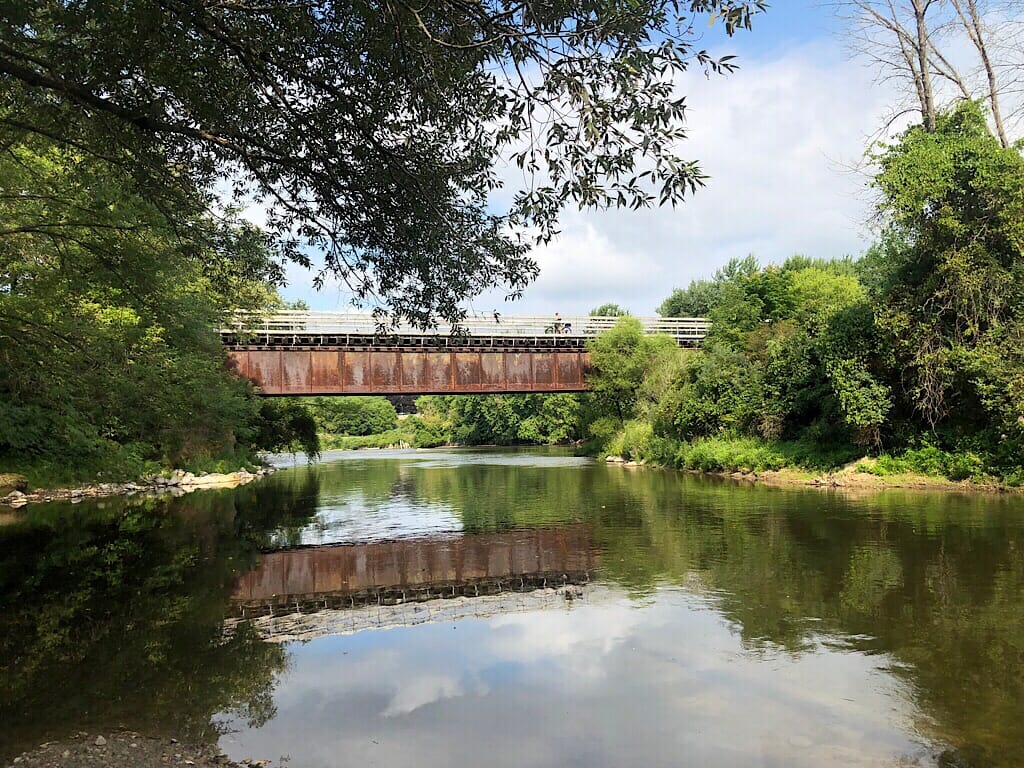 We’d stopped for a lot of photos on the way out, and that was a good thing, as the wind picked up and the skies grayed over. Our return ride was much brisker, with only a few stops at scenic overlooks and the rapids that once were behind the dam. 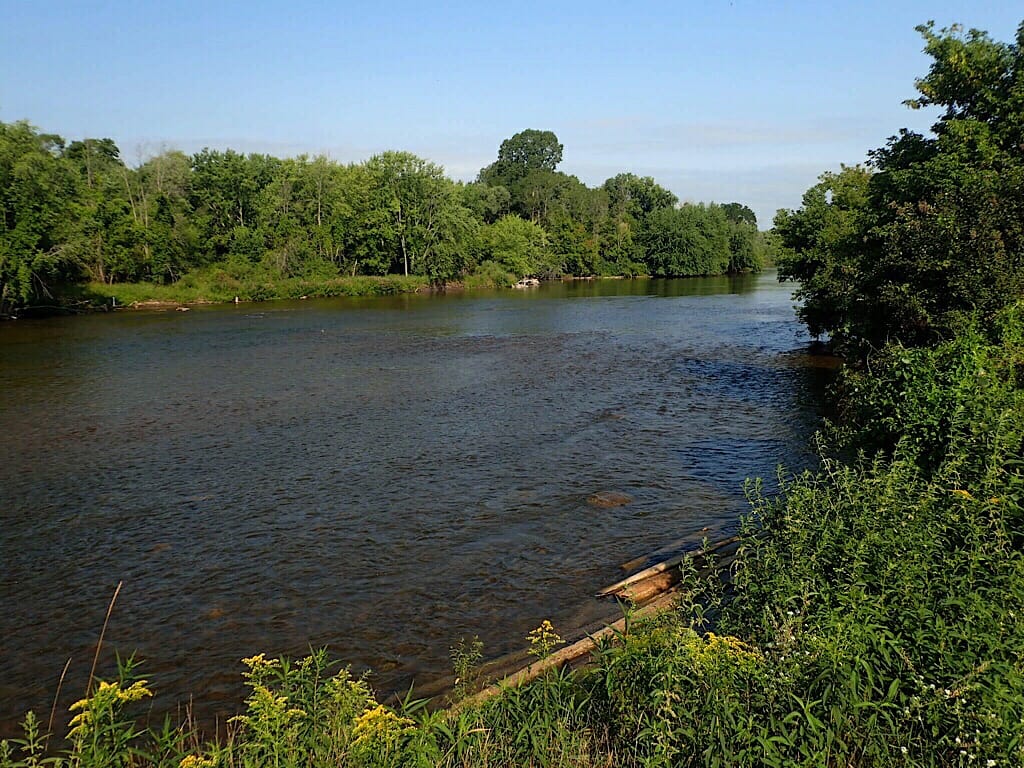 Crossing at Swede Hill, I saw a bushy reddish squirrel, a new one for me. We encountered many more cyclists, joggers, and walkers on the return trip. It was a leisurely 6.3 mile round trip, a pleasant serendipitous find. 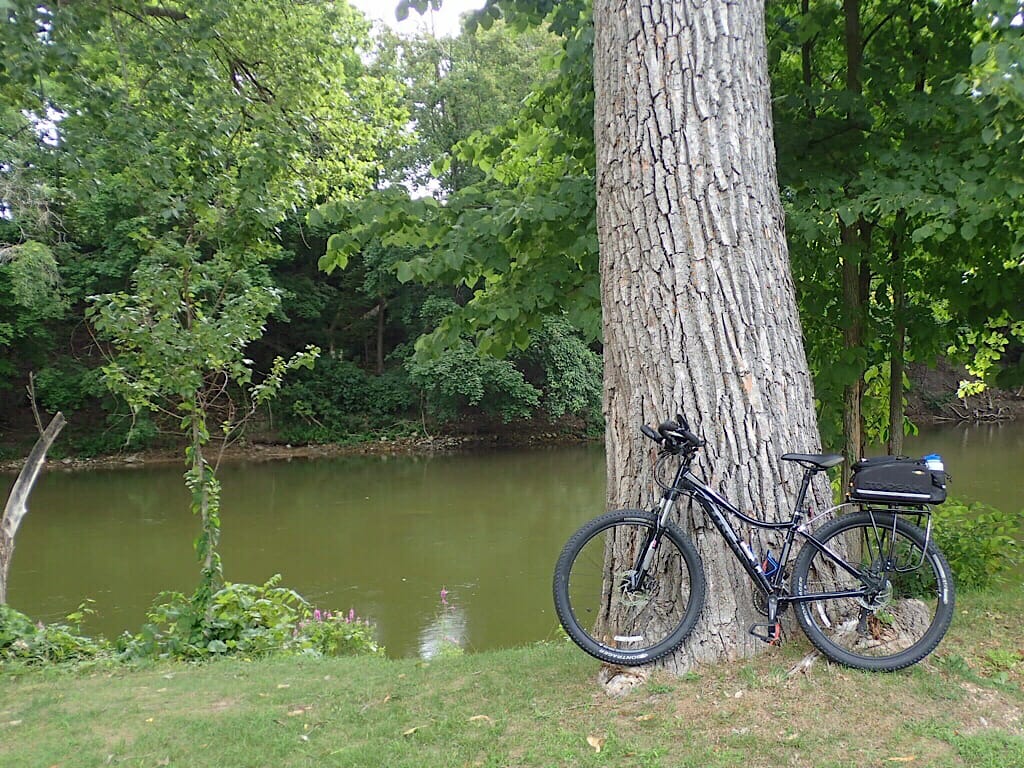